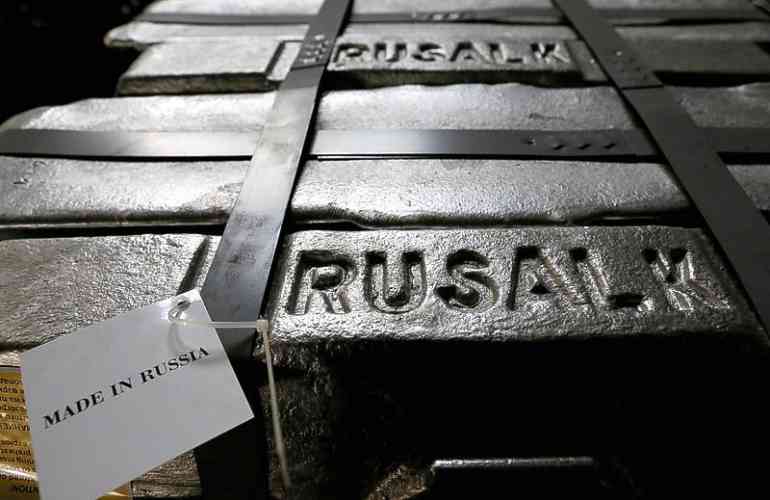 LONDON–International financial groups took action on Wednesday to distance themselves from the shares, bonds and metal of Russian aluminium giant Rusal after the United States imposed sanctions on the company.

In Moscow, the government pledged to provide Rusal with short-term liquidity and offer other assistance while it also considered hitting back by looking at U.S. goods or goods produced in Russia by U.S. companies.
Shares of United Company Rusal, one of the world’s biggest aluminium producers, will be deleted from global equity and debt indexes while its metal will not be allowed on the London Metal Exchange (LME) and the CME Group.
The U.S. Treasury on April 6 announced sanctions against seven Russian oligarchs and 12 companies they own or control, saying they were profiting from a Russian state engaged in “malign activities” around the world. This included Oleg Deripaska and his Hong Kong-listed company Rusal and his newly created holding company En+ Group.
The two companies will be deleted from FTSE Russell’s equity indexes effective from the open on April 13, the index provider said in a statement. Bloomberg users in Europe told Reuters that Bloomberg had stopped displaying share prices of Rusal, En+ Group and Swiss pumpmaker Sulzer, all of which are subject to the sanctions. Bloomberg declined to comment.
Rusal’s shares in Hong Kong have slumped by half since the sanctions were imposed on Friday and gave up another 1.9 percent on Wednesday. The new sanctions were an attempt to capture global markets for U.S. companies, Prime Minister Dmitry Medvedev told Russia’s lower house of parliament.
“Measures in response should be well thought-out,” he said. “There are quite a lot of products … in our markets that we get from the USA.”
Russia imported $12.5 billion worth of U.S. products in 2017, according to official Russian customs data. That included aircraft, machinery, pharmaceutical and chemical products.