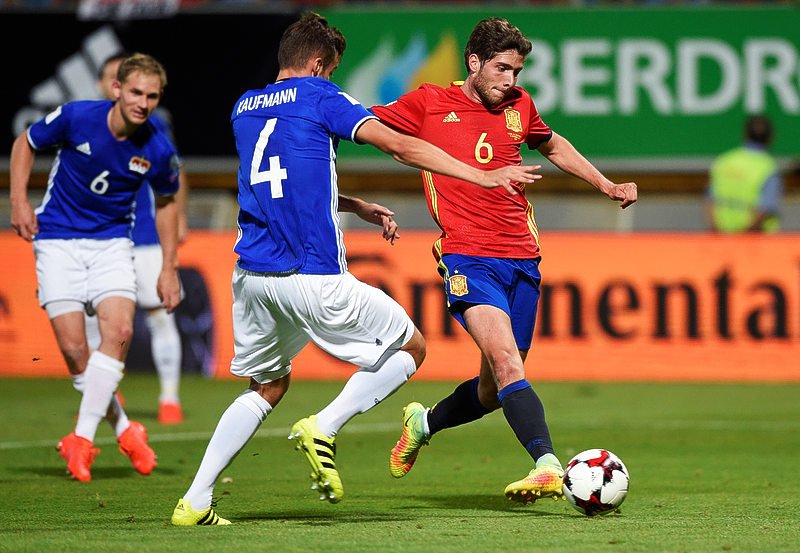 BARCELONA– Spain started their World Cup qualifying campaign with a crushing 8-0 win over Liechtenstein, laying down a marker in Group G with a ruthless second-half display on Monday.

Diego Costa scored his first goal for Spain in almost two years to put Julen Lopetegui’s side ahead in the 10th minute in their first competitive game under their new coach and Sergi Roberto doubled the lead in the 55th.
Costa got his second while David Silva and substitute Alvaro Morata also got braces and Vitolo opened his international account as the former world champions ran riot.
“Sometimes an opponent’s name can fool you but we played a great game,” said Lopetegui. “We reaped in the second half what we had sowed in the first.”
Costa was the focus of the pre-match build-up having netted once in his previous 11 appearances since switching nationalities from Brazil in 2014 and needed only 10 minutes to open the scoring, rising high to head in Koke’s free kick.
The entrance of substitute Nolito for Thiago Alcantara at the start of the second half livened up the home side and it was the Manchester City forward who laid the ball on for Roberto to grab his first international goal.
The floodgates had opened for Spain, the 2010 world champions who lost in the last 16 of this year’s European Championship.
Silva was soon in on the act, adding to his double in the friendly against Belgium last week by turning in Vitolo’s cross from close range.
Barely a minute later, Silva repaid the favour by teeing up the Sevilla forward to mark another impressive display for his country with a goal.
Spain only grew hungrier and Costa wanted another bite. He effortlessly turned two defenders in the area before firing at goalkeeper Peter Jehle’s right foot, calmly nodding in the rebound for the fifth goal.
“Players control their destiny and we just try to help them, but Diego is a great player and he proved it today,” added Lopetegui.
Costa came off to a standing ovation but his replacement Morata threatened to upstage him with two strikes in under a minute, slamming in at the near post before striking the ball past the hapless Jehle from the edge of the area.
Silva had a goal harshly ruled out as stoppage time approached but the City playmaker grabbed his second a minute later with a crisp shot.