Home Local News Rutte: We will not abandon St. Maarten 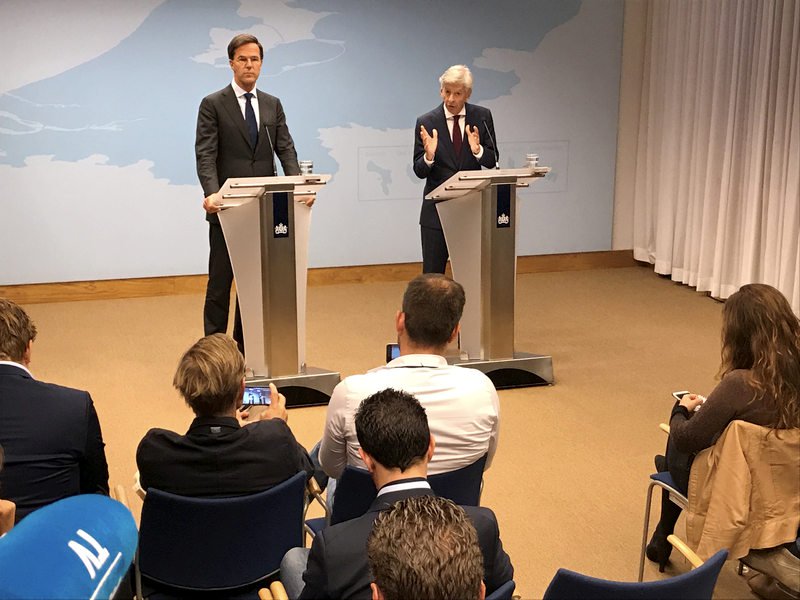 Prime Minister Mark Rutte and Minister Ronald Plasterk address the media in The Hague on the situation in St. Maarten and the emergency relief. (Suzanne Koelega photo)

THE HAGUE–The Netherlands will not abandon St. Maarten. It were these reassuring words that Dutch Prime Minister spoke during a press conference in The Hague on Friday morning. More assistance is on the way.

Dutch caretaker Minister of Home Affairs and Kingdom Relations Ronald Plasterk announced the sad news during a second press conference on Friday afternoon that there were now two confirmed deaths on the Dutch side. There are 43 persons wounded, of whom 11 critically. The 65 patients in need of kidney dialysis will be flown to Aruba: 15 acute cases possibly on Friday evening and the others on Saturday morning.

During Friday morning’s press conference, Rutte, but also Plasterk, reconfirmed their commitment to assist St. Maarten. Both once more expressed their grave concerns about the situation and they wished the people much strength in these very difficult times. “Our thoughts are with the people in St. Maarten,” said Rutte, who spoke of a catastrophe of “epic proportions.”

The first Dutch emergency flight has landed on St. Maarten with additional relief supplies and Defence personnel. Plasterk said that in total there was now at Dutch support team of 235 persons, mostly consisting of Defence personnel.

On Thursday two Defence aircraft left Eindhoven Airport in the Netherlands, a KDC-10 and a C-130, with 110 militaries and food and water for 40,000 people for five days. The aircraft flew to Curaçao awaiting clearance of the St. Maarten runway.

Communication remains very difficult with St. Maarten. Prime Minister Rutte said that the first priority was to bring the emergency assistance on shore. A challenging task considering the damage to the harbour and airport.

“We are focusing on emergency relief and restoring public safety. St. Maarten needs water, food, tarpaulins, tents, medication and other emergency supplies. The destruction and desperation is enormous,” said Rutte.

The Netherlands is offering full support to the island, but the reconstruction period and the associated funds is a next phase and that now was not the time to draft detailed plans on how to rebuild St. Maarten. “Emergency assistance is first and foremost,” he said.

Plasterk stated at a second press conference Friday afternoon that he had been in contact with St. Maarten Prime Minister William Marlin that same afternoon to discuss the logistics, the mandate of the emergency relief and assistance to help to run St. Maarten’s Government system which has broken down.

The Minister said on Friday morning that the Dutch Government needed a clearly worded mandate to expand relief assistance, a subsequent mandate from the one it received from Marlin before the hurricane. St. Maarten is an autonomous country with its own responsibilities and authority and has to formally ask the Dutch for assistance. Another 235 militaries, including 40 Curaçao police officers, are on the way to St. Maarten aside from the some 250 militaries already in place on the island.

When Plasterk spoke to Marlin earlier, the Prime Minister told him that vandalism and looting was indeed a big problem and that assistance was needed to restore order. Marlin also informed the Minister that without running water and electricity, public hygiene was a great source of concern.

Late Friday afternoon, Plasterk announced at the second press conference late Friday afternoon that Prime Minister Marlin had asked for extended relief assistance and that this meant that The Hague now had a clear mandate to work with. Marlin told Plasterk also that the militaries were needed to restore public order.

Rutte said that there has been close contact with French President Emmanuel Macron to cooperate relief efforts. He said that on Friday afternoon, he would again have contact with Macron by telephone. The Dutch National Crisis Centre attended by various Dutch Ministers has been meeting on a daily basis since the hurricane.

The fact that St. Maarten Minister Plenipotentiary Henrietta Doran-York has not been invited to these meetings, was a result of the constitutional relations in the Kingdom. “We are talking about what the Netherlands as a partner country can do in the Kingdom. We share the information with the island’s authorities. We cannot allow delays. We have to act promptly,” said Rutte. “We will not abandon St. Maarten.

Plasterk said during a press conference the day before, on Thursday, that naturally the Netherlands would assist St. Maarten wherever possible. “That is evident. We are in the Kingdom together. The Kingdom Charter clearly states that we assist each other when needed. This is more current than ever.”

King Willem-Alexander will be travelling to Curaçao on Sunday and visit St. Maarten as soon as possible. The Dutch Government Information Service RVD announced the King’s visit on Friday morning. The King will be accompanied by Plasterk.

In Curaçao, the King and Minister will be informed about the assistance currently provided from Curaçao by Dutch Defence in the Windward Islands and especially St. Maarten which has been the hardest hit by Hurricane Irma.

While in Curaçao, possibilities will be looked into to have the King and the Minister visit St. Maarten, St. Eustatius and Saba as soon as this is logistically possible. The King’s mother, then Queen Beatrix, also went to St. Maarten after the passing of Hurricane Lenny in November 1999. And, even though she could not land in St. Maarten due to weather restrictions, she wanted to show her commitment and involvement.