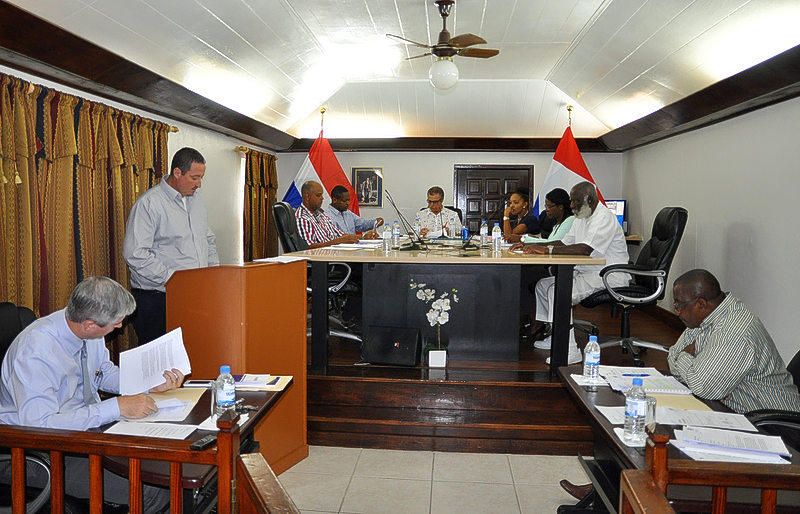 SABA/THE HAGUE–The 2015 financial statements of the Public Entity Saba has received a positive audit, again. This is the fourth time in a row, a milestone which has not been accomplished by any other Dutch Caribbean island. The Saba Island Council discussed the 2015 annual report and related documents in the Central Committee on Thursday.

The audit statement of accounting firm Ernst and Young (EY) was positive in all aspects. “We are of the opinion that the audit information that we received was sufficient and suitable to offer a substantiation for our qualification regarding the dependability of the annual report and the financial legitimacy.”

The accountant stated that the 2015 annual account presented a “true view of the size and composition” of both the revenues and expenditures over 2015 of the assets and liabilities per December 31, 2015, in accordance with the budget and other relevant legislation. The accountant also found that the annual account and balance mutations were realized in a legitimate manner.

In line with the financial statements since 2011, the year after Saba became a Public Entity of the Netherlands, the Island Government again made an effort to get an unqualified, independent audit opinion with regard to the “true and fair view” and also on the regularity of the data presented, it was stated in the introduction of the 2015 annual report.

“Despite the positive results, the Public Entity has to continue to handle its finances carefully. There are no problems with regard to income and expenditure, but considerable positive results remain necessary to guarantee the necessary liquidity in the years to come. This is also necessary to be able to meet (repayment) obligations,” it was stated in the annual report.

“The positive result of $865,758 has mainly come about by incidental factors and by careful execution of the budget and the capitalization of investments. An amount of $807,011 was budgeted to repay interest-free loans and other commitment.”

The fact that the remaining $58,747 was lower than anticipated mainly has to do with the sizeable provision that was made to establish a reserve to safeguard the future payment of its politically elected persons and the settlement payment for the 2011-2015 pension premiums.

In 2015, the Public Entity received a grant from the Netherlands to help improve the island’s liquidity position. The audit report to the financial statements made special mentioned of the long-term liquidity position. “At present, the Public Entity is unable to comply with its long-term commitments. Therefore, the elimination of backlogs can only be financed by means of special purpose grants,” it was stated in the 2015 annual report.

Finance Commissioner Bruce Zagers said he was proud of Saba achieving yet another milestone in its financial management, an exercise that has required much effort in the past years. Saba secured its first positive audit statement in 2012, and has since done so every year. Zagers expressed gratitude to the Island Government’s financial team, and also to the Committee for Financial Supervision CFT and the auditor EY for their support.

“Saba continues to excel with its financial management, but we are yet to see how this will translate into the transfer of more responsibilities and tasks to the Public Entity, as well as additional funds from the Dutch Government to cover the cost of maintenance and policy,” said Zagers.

A majority in the Second Chamber of the Dutch Parliament is in favour of rewarding the public entities that consistently have shown that it can duly execute its responsibilities where it concerns financial management and the level of the government administration by giving the islands more leeway in taking their own decisions.

“I propose that we give Saba more room to give content to its own responsibilities and to make their own policy decisions,” said Member of Parliament (MP) André Bosman of the liberal democratic VVD party during a June 6, 2016 debate with Minister of Home Affairs and Kingdom Relations Ronald Plasterk. There was similar support from the Labour Party PvdA, the Socialist Party (SP) and the Democratic Party D66.

“How are we going to reward Saba for the good work that is being done there,” asked Roelof van Laar (PvdA), who mentioned the issuing of work permits as an area in which Saba should be able to handle more of its own affairs. He also brought up the request of the Saba Government regarding the interest-free loans. “Saba has done a lot of good investments, but that has resulted in a maximum strain on the repayment capacity. Is there a way to give Saba some air?”