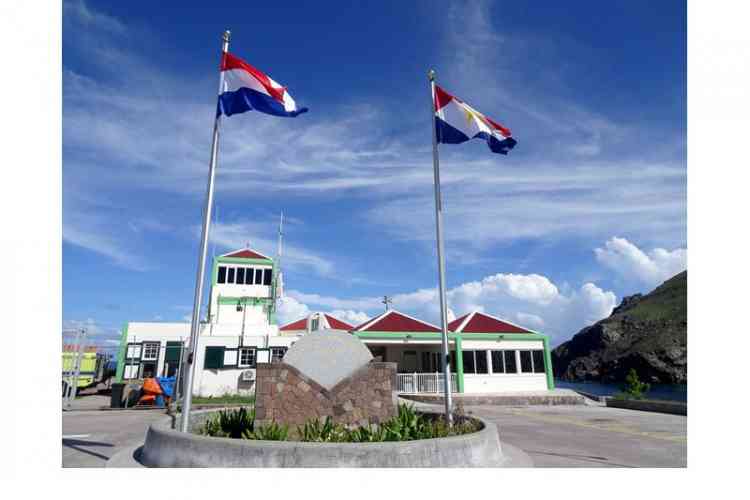 Saba’s Juancho Yrausquin Airport in front of the new location of the flagpoles and the engraved airport name.

SABA–The renovation and expansion project of Saba’s Juancho Yrausquin Airport has been completed, apart from the installation of screening equipment which will be done at a later time.

The bulk of the airport project, paid for by the Dutch government, took place in September 2018 and started with the paving of the runway with concrete. For this purpose, the airport was temporarily closed.

The works on the terminal building, carried out by Hassell Enterprises Saba (HES), started early September 2018. This was done at the same time the runway was being paved and the airport was closed in order not to unnecessarily inconvenience the passengers and the people working at the airport.

The airport terminal renovations included the tearing down of part of the building. Some interior walls were removed to facilitate the construction of the extensions. The Public Entity Saba was in charge of project management, with supervision carried out by the Planning Bureau.

Airport Manager Maegan Hassell explained that the majority of the project is completed. The major improvements include an enclosed arrival area, central air-conditioning system, more seating facilities for passengers, the enclosed, inside luggage area, the new air-conditioned bar, more space in the front at the entrance, an additional airline office in case it is needed in the future and installation of automatic sliding doors, a first on Saba.

“Especially the central air-conditioning is a big plus because the temperature at Flat Point can get high,” said Hassell.

The Immigration Department and Customs Department used to share one space. Now they each have a separate room.

Hassell, who has been airport manager since November 2015, said the renovation and expansion was long overdue with the last major changes made to the building in 1999-2000. She said the 2018-2019 project had a positive effect on the airport operations, safety and the working environment for the 15 persons working at the airport.

Commissioner of Aviation Affairs, Tourism and Economic Affairs, Bruce Zagers said he was happy with the result of the airport project. “It is now a more modern airport facility with more space for passengers and the people working there. The building is air-conditioned, but people can still sit outside to enjoy the Caribbean breeze.”

Zagers said a priority in this project was accommodating arriving passengers who no longer have to stand outside, exposed to the elements. Having an enclosed arrival area also improves safety.

The commissioner complimented Saba’s contractor HES for doing “a great job.” “The work is of high quality,” he said.

Juancho Yrausquin Airport generally handles four Winair flights per day. Flights are added in busy periods when, for example, the medical school students leave the island or come back. There are also three flights per week to transport patients on behalf of the Caribbean Netherlands Health Insurance Office ZVK, carried out by SXM Airways.

The airport handled 14,314 passengers in 2018. The total number of aircraft movements amounted to 1,515 in that same year.