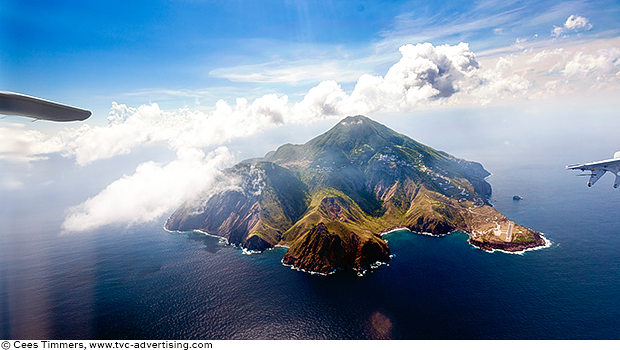 SABA–Saba’s Juancho E. Yrausquin has topped a global travel poll of the world’s most scenic airport landings, conducted by the private jet booking service PrivateFly. The results were announced on Tuesday. St. Maarten’s Princess Juliana International Airport made number seven in the poll.

A panel of major names in the travel industry formed the shortlist for the public vote of the “Most Scenic Airport Landings 2017” poll, with travel writer Seth Miller nominating Saba. He described the “gorgeous scenery…a mountain sticking up in the middle of the ocean.”

Chief Executive Officer (CEO) of PrivateFly Adam Twidell, who is an experienced pilot, commented in a press release: “Flying into Saba is extraordinary – something I’ll never forget. You approach the mountainous island over the sea to see an impossibly tiny runway appear, dropping off into the ocean on the other side. The pilots who land here are highly-skilled and local operators have an exceptional safety record, but it’s still a heart-in-the-mouth moment.”

With a runway just 1,312 feet long and a difficult approach, pilots must have special training to land at Saba’s airport. Only certain turboprop aircraft such as the Twin Otter, the BN-2 Islander or Cessna Grand Caravan are agile enough to perform the short stop required.

One voter commented: “Cliffs, ocean and an adrenaline-pumping experience when you land, feet above a cliff and come to halting stop.” Another comment was: “It is thrilling! You see Saba in the distance, then closer and closer. Saba fills the window, you turn, and drop, and land! What a ride!”

Judge Seth Miller said: “Landing at Saba is essentially playing a game of chicken with a mountain sticking up in the middle of the ocean. Aim right for it and at the last possible moment a sharp turn to drop down on the shortest active commercial runway in the world. Gorgeous scenery and more than a little bit of excitement along the way.”

Saba Tourism Commissioner Bruce Zagers was elated with the recognition for his island’s airport. “We are thrilled to have first of all been included in the polling and even more so now that we have been elected as the World’s Most Scenic Airport Landing 2017. With this accomplishment we hope that many more adventurist and casual visitors will choose Saba as their next destination so that they too can experience the illustrious thrill of landing at our airport.”

Juancho E. Yrausquin Airport, named after a former Aruban Minister, was inaugurated on September 18, 1963. At the time of its inception many thought a landing strip on the island was not possible, but due to the enthusiasm of Captain Remy F. de Haenen, the airstrip was put in place.