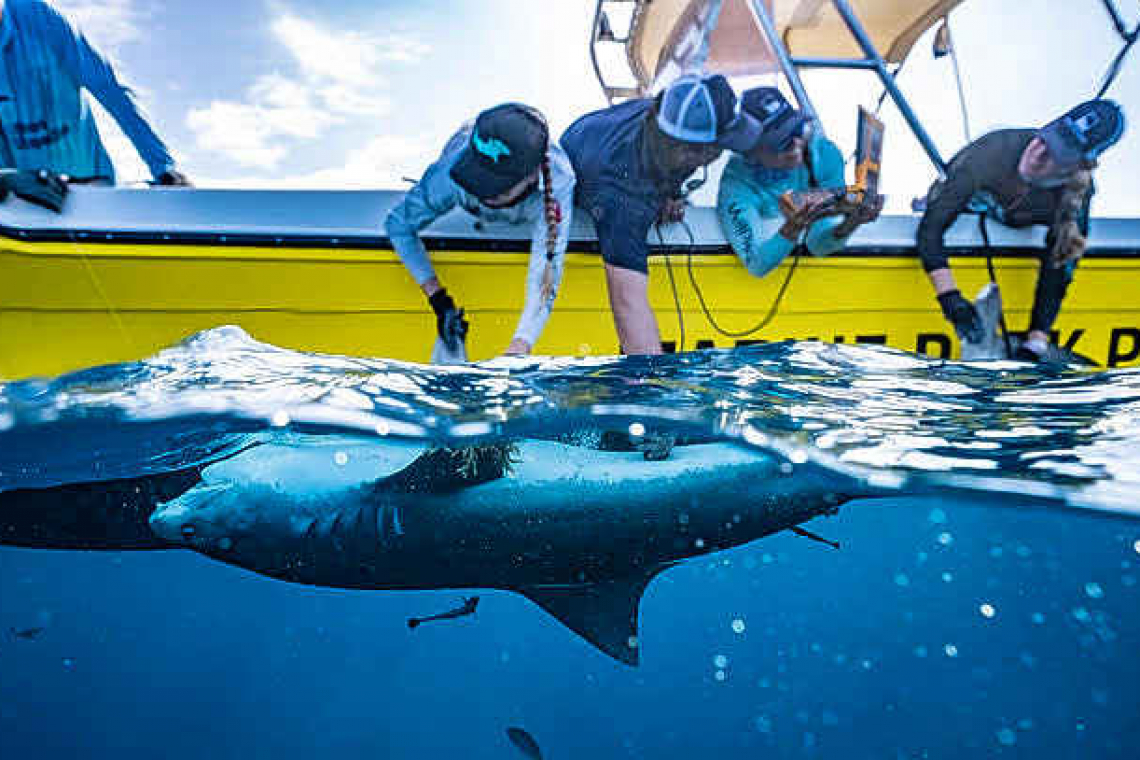 Satellite tagging of tiger sharks has been conducted on the Saba Bank and around St. Maarten.

PHILIPSBURG–Starting August 1, a team of researchers will spend a week on the Saba Bank investigating the life-cycle of tiger sharks. Researchers will investigate the migration routes, where and when tiger sharks breed so they can protect them better within the Dutch Caribbean’s Yarari Marine Mammal and Shark Sanctuary, as well as beyond.

In 2016, Saba Conservation Foundation, Nature Foundation St. Maarten, and Sharks for Kids partnered together as part of DCNA’s Save our Sharks Project funded by the Dutch National Postcode Lottery. Since then, satellite tagging of tiger sharks has been conducted on the Saba Bank and around St. Maarten. Through this research we now know that tiger sharks in Dutch waters travel throughout the Caribbean basin, with most of these tagged sharks being sexually-mature females.

During the upcoming expedition, the researchers aim to not only tag and track more tiger sharks to further investigate the life cycle, but they will also measure if and how large the pups inside pregnant tiger sharks are. This will help to determine if the Saba Bank is in fact a breeding ground for tiger sharks, one of the main goals of the expedition. The other objective is to see where these transboundary sharks migrate to better understand the importance of the Yarari Marine Mammal and Shark Sanctuary, and protect other geographical areas.

The Yarari Sanctuary was established on September 1, 2015, and aims to protect marine mammals, sharks, and rays throughout the waters of Bonaire, Saba, and since September 2018, St. Eustatius. Collaboration between not only the six Dutch Caribbean islands but countries across the wider Caribbean is necessary to protect and conserve these essential species and ecosystems. Therefore the Caribbean Shark Coalition was recently formed to collaborate better in the entire Greater Caribbean region.

Celebrated on July 28 each year, World Nature Conservation Day acknowledges that a healthy environment is the foundation for a stable and healthy society. This includes a healthy ocean which, undoubtedly, depends on sharks. Sharks are large top predators that serve a critical role in maintaining balance in the marine ecosystem. Sharks help keep their prey population healthy by eating the weak species, while also affecting their prey’s distribution. In healthy oceans, sharks help to maintain stable fish stocks and healthy coral reefs and seagrass beds, which is important for the fisheries and the economy of the islands.

The Tiger Shark research expedition is coordinated by DCNA and generously funded by WWF-NL through the Biodiversity Funds and the Dutch National Postcode Lottery. For more information on the Pregnant Tiger Shark Expedition, follow the participating organizations on Facebook, Instagram or DCNA’s website (https://dcnanature.org/news/).