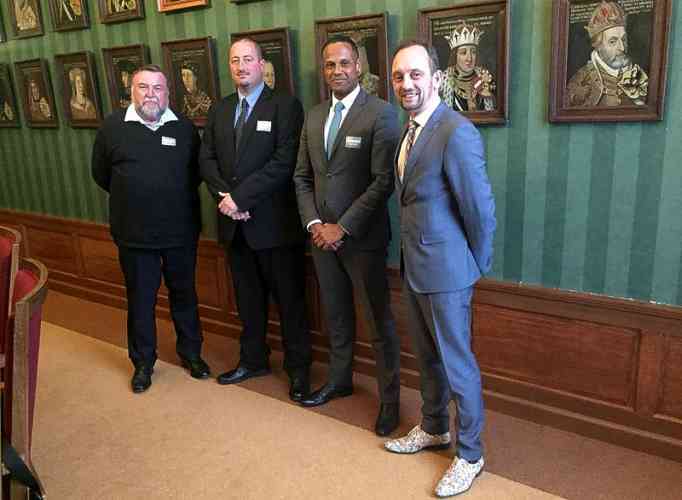 THE HAGUE–The Saba delegation led by Commissioner Bruce Zagers met with several members of the First and Second Chambers of the Dutch Parliament last week. The meetings were deemed constructive and inspiring.

The Saba delegation met with members of the First Chamber’s Permanent Committee for Kingdom Relations and with members of the Second Chamber’s Committee for Kingdom Relations Alexander Pechtold of the democratic party D66, Joba van den Berg of the Christian Democratic Party CDA and Ronald van Raak of the Socialist Party (SP) during the first week of its visit to the Netherlands

The delegation provided an update on the recovery process following Hurricanes Irma and Maria during these meetings, and outlined the Saba Government’s goals for the coming period.

Everyone was enthusiastic to know how things are going on Saba, stated Zagers. “We were well received, and everyone was complimentary about Saba’s progress and stability. There seems to be broad support to tackle the poverty issue on the islands. This was evident in all the meetings that we had,” he said.

“We stressed the importance of putting together a poverty-alleviation package before the study on the social minimum is completed in a few months. No one will be surprised when the study shows that the social minimum at this point it too low. Having a package prepared before the Spring Memorandum (“voorjaarsnota”) of the Dutch Government ensures that changes can happen in 2019.”

The delegation also elucidated its new approach regarding the division of tasks. Saba has lobbied for more responsibilities for some years, but there has been little progress to achieve any tangible results. Through this new approach Saba is seeking a shared responsibility in the area of the local social affairs office and the granting of work permits.

“Now that we have our own Social Affairs Department we would like to create a one-stop-shop where the Central Government Service RCN and the Saba Government join forces and work closely together with other stakeholders to mitigate the bureaucratic struggle that we all see in the domain of working permits and social benefits,” Zagers said. He said this idea had been well-received in The Hague. At the same time, it was observed that much needs to be done to ensure that this goal will be achieved.

Other issues discussed during the meetings with the Dutch Parliament included the limited air access to the island, the rebuilding of the harbour and its impact on economic development, as well as the government finances.

The delegation will continue to work on the Saba agenda with the stakeholders in the Netherlands in the coming days. Addressed will be, among other things, poverty alleviation, the reduction of the high cost of living and the high cost of doing business, the government finances and the division of tasks.