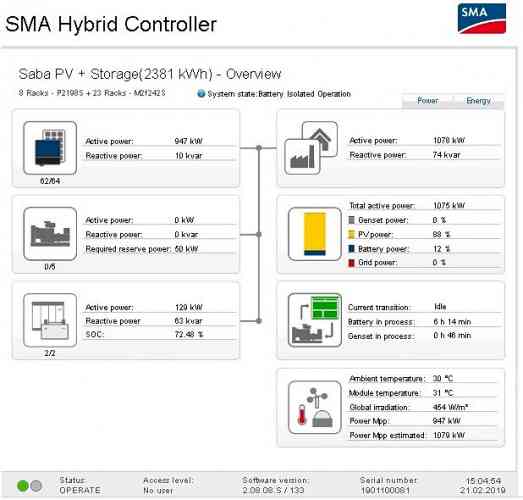 SABA–In a historic moment for Saba Electric Company (SEC) and Saba itself, on Wednesday the entire island was for the first time powered completely by solar energy from SEC’s two solar parks and its battery-storage system. For two hours, from 3:00pm to 5:00pm, SEC’s diesel generators were powered down, allowing Saba to run on this renewable energy source with the diesel-power plant in complete silence.

On Thursday, by as early as 8:00am, Saba was already being powered completely by solar energy again. The expectation is that on days with ideal weather conditions the island can run on solar power for nine to 10 hours in the diesel-off mode.

In the second phase of SEC’s solar park project, the photovoltaic capacity was doubled to two megawatt peak (MWp) and the battery capacity increased to 2.3 megawatt hour (MWh).

The key component is the Sunny Central Storage 2200 battery inverter with grid-forming characteristics. This allows the diesel generators in SEC’s power plant to be completely shut down in automatic mode, without compromising the stability of the frequency in the grid.

The SMA Hybrid Controller is responsible for real-time energy and power management and synchronizes diesel- and battery-operation intelligently and fully automatically. Within milliseconds, the system compensates for the photovoltaic array’s power fluctuations caused by, for example, the exceptionally fast-moving clouds in this region.

Instrumental to the success of SEC’s solar park project, from its inception to its completion, were its technical consultants The Green World Company and its legal consultants of the law firm VanEps Kunneman VanDoorne, SEC said in a press release on Friday.

SEC’s second solar park project was financed through budget support of the European Development Fund (EDF) with partial financing by the Dutch Ministry of Economic Affairs and Climate Policy.