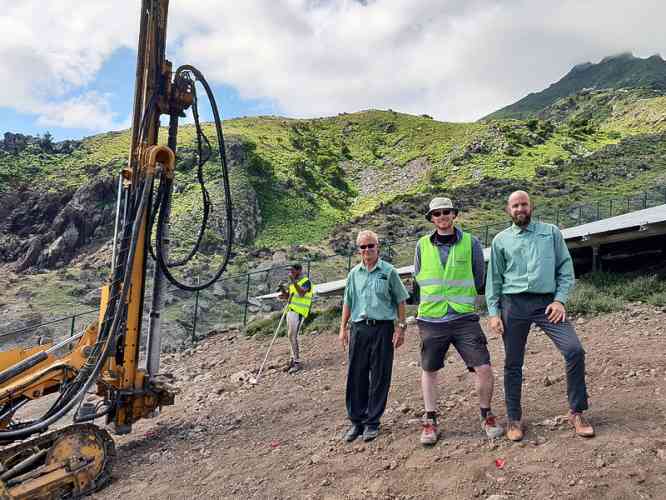 SABA–Months of planning, scheduling and preparation culminated past Friday in the start of the installation of Saba Electric Company’s (SEC’s) second solar park project.

With a 1.142 Megawatt peak (MWp) solar park already in place, this second park is a continued effort by SEC to increase its shares in renewable energy and to meet the targets set forth in the Energy Sector Policy of the Public Entity Saba.

The ultimate goal is to have the island powered completely by renewable energy sources, with this solar park being the second step in realizing this goal.

With a total of 2,960 solar panels to be installed, SEC’s second solar park will have an installed capacity of 1.006 MWp once completed. The two solar parks combined will meet approximately 40 per cent of Saba’s energy demand.

A total of two Megawatt-hour (MWh) battery storage will be installed in this second phase. In optimum weather conditions, the second solar park and the additional battery storage would allow for the system to operate in the diesel-off mode. This means that the diesel generators at the power plant would be shut down and the island would run fully on solar energy.

Both parks also allow for SEC to achieve another goal, which is to reduce its dependency on diesel fuel for the generation of electricity.

Due to the volatility of world oil prices, which are increasing, and the impact the burning of fossil fuels has on the environment, it is deemed imperative that alternative energy sources are used in Saba to produce sustainable and affordable energy.

The contracted party for the execution of the electric-panel component of this project is Netherlands-based solar company Ecorus Projects and its Portuguese subcontractor Enersado Unipessoal. The battery component of the project will be executed by SMA Sunbelt Energy in Germany.

A large part of this project is funded through the European Development Funds and partially by the Dutch Ministry of Economic Affairs and Climate.