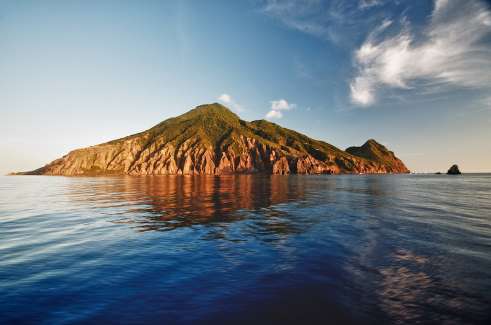 THE HAGUE–Saba and surrounding sea did not win one of the three awards of the Most Beautiful Nature Area of the Netherlands. In fact, Saba came out last of the thirteen nominees with a mere 2,666 public votes.

The Dutch Wadden Area, the Veluwe and National Park Hollandse Duinen (dunes) were elected as the three winners with respectively 15,135 votes, 10,053 votes and 8,583 votes by the Dutch public. The wild card, a decision of the expert jury chaired by Pieter van Vollenhoven, went to Delta Biesbosch-Haringvliet.

Saba Island Governor Jonathan Johnson was a guest on the TV show and was seated among the representatives of the other 12 nominated nature parks. Although Saba didn’t win, Johnson did get the opportunity to mention Saba’s national parks, the Saba Marine Park and the Saba Bank.

Talk show host Matthijs van Nieuwkerk called Saba’s participation “remarkable.” He asked Johnson whether he too was a park ranger, like the others seated next to him and whether he had come over to the Netherlands especially for the announcing of the winners.

In total 87,903 persons voted in the public election which kicked off on October 10 and closed on Monday. The three winners of the Most Beautiful Nature Area, as well as the winner of the wild card, will receive a maximum amount of 300,000 euros to invest in the development of their national park. The winners will also be promoted as icons of Dutch nature.

According to Van Dam, the objective of the election was to strengthen the Dutch nature, the awareness of nature while at the same time providing an opportunity for the nature areas to develop into national icons just as Amsterdam, the Dutch tulips and windmills are.

“It is great to see how much energy was created through this election. The nominees engaged in an enthusiastic campaign to promote their nature area,” said Van Dam, who visited the 12 nominated areas located in the Netherlands in one day earlier this month. The election will not be a recurring annual event.