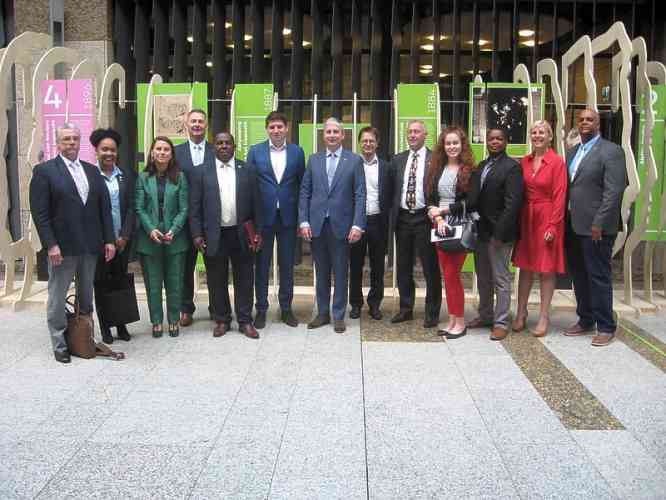 THE HAGUE–Members of the Saba Island Council had a positive meeting with the Permanent Committee for Kingdom Relations of the Second Chamber of the Dutch Parliament on Thursday.

Windward Islands People’s Movement (WIPM) Island Council members Eviton Heyliger, Vito Charles, Hemmie van Xanten, Carl Buncamper and Esmeralda Johnson were able to raise some of the issues that are important to Saba: the eradication of poverty, the establishing of a social minimum, the functioning of the National Government Service RCN and the Health Insurance Office ZVK on Bonaire.

Buncamper explained that the delegation had focused on these four important topics because of the limited time of the meeting, about three quarters of an hour. The limited banking services in Saba and the Fort Bay harbour project were also mentioned.

“The process of establishing the social minimum is progressing in a slow pace. The measures implemented by the Dutch government to alleviate poverty somewhat are welcome. But we can’t say that we sleep without worries on this vital issue,” Buncamper told the media after the closed-door meeting. He and the rest of the Saba delegation were positive about the committee members’ response. “This group supports us,” said Buncamper.

Buncamper further pointed out that Saba was being hindered by the bureaucratic rules of the Dutch government and the RCN. “It is clear that we are able to manage our money and we are doing excellent in the area of financial management, so we believe that we should be granted the opportunity to handle more of our own affairs,” he said.

Member of the Second Chamber André Bosman of the liberal democratic VVD party agreed with the Saba delegation’s remarks about too much bureaucracy being in place and granting Saba more autonomy to handle some of its own affairs.

Other Committee members present at the meeting were Chairman Jan Paternotte and Antje Diertens of the Democratic Party D66, Attje Kuiken of the Labour Party PvdA and Ronald van Raak of the Socialist Party (SP).

The committee visited Saba in January this year.

The Saba and Bonaire delegations attended the annual congress of the Association of Dutch Municipalities VNG in Barneveld earlier this week. The Saba delegation also had a meeting with the Kingdom Council of State in The Hague.