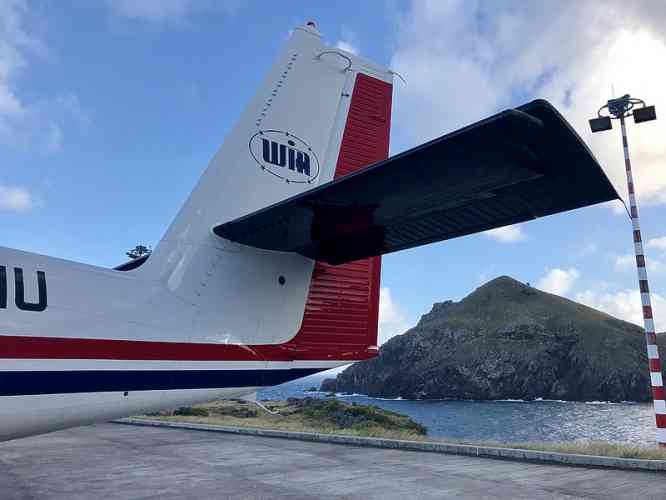 THE HAGUE/SABA–The Saba Government keeps looking at ways to increase access to the island by sea and air. Not an easy task with the high airfares, the dependability on hurricane-hit St. Maarten and to a certain extent the reluctance to cater to Saba’s wishes and needs.

Accessibility to Saba is a vital aspect to the further development of the island’s small economy. The damage that Hurricane Irma did to St. Maarten, which serves as the main feeder of transport to Saba via air and sea, have also affected Saba.

Saba’s accessibility and the relation to the general economic development came up in several meetings that the Saba delegation, headed by Commissioner Bruce Zagers, had with the various Dutch ministries in The Hague in the past two weeks.

One of the issues that came up in the meetings was the landing permit for another airline to fly to Saba, which so far has not been granted. “Right now it is difficult to get to Saba. The seating to Saba is limited and expensive. Tourists want to come to Saba, but they either can’t get a seat, especially when travelling in a group or the airfare is too high. That discourages people from coming to Saba and that is not good for our economy,” Zagers told The Daily Herald.

Adding to the problem is that ferry services between St. Maarten and Saba have been reduced since Hurricane Irma. The Edge is coming to Saba three times a week. The Dawn ferry service ceased due to damage to the vessel. Before the hurricane there were six ferry trips per week.

Prior to Hurricane Irma Saba had four Winair flights per day. “Now we are down to three and one of these flights is not even a dedicated, direct flight because it is shared with St. Eustatius,” said the Commissioner.

Zagers explained that the seats on the two direct flights are dominated by persons travelling to St. Maarten for medical care. The accessibility has been discussed several times with the Dutch Government and with the airline in question.

Then there is the recently started CN-Express which is a direct, twice a week flight between Bonaire, St. Maarten and St. Eustatius executed with an ATR42 of Air Antilles and with an onward connection to Saba.

While the service is good for Saba patients who need to go abroad for medical care and for civil servants who need to travel between the islands, the question is how attractive the CN-Express is for tourist travellers who want to spend some time in Saba.

This has to do with the one-way airfare of US $300, excluding taxes and fees. “The CN-Express is good for medical referrals and for civil servants because it greatly reduces their travelling time, but a solution also needs to be looked at how to promote tourism,” said Zagers.

“Saba would like affordable packages to attract more tourists and the route needs to be marketed to fill the empty seats. Any possibility to get extra people to Saba and St. Eustatius should be looked at,” said Zagers.

One of the reasons to start the CN-Express was to provide additional access to St. Eustatius and Saba with the compromising of the St. Maarten hub following Hurricane Irma. The idea was for the CN-Express to contribute to the economic development of the two smaller islands, to improve medical referrals as well as the connections for islands’ residents.

In another, related matter that also affects Saba’s economic development, Zagers stated that the issue of very limited banking services on the island was also discussed during the visit of the Saba delegation to the Netherlands.

There are only the ATM machines on the island and limited banking services. This presents a problem for residents and businesses and it is also not conducive to Saba’s general economic development.

“We need to seek alternatives to improve banking services,” said Zagers, who announced that the Dutch Central Bank DNB is conducting a baseline study to assess which basic bank services the island needs. “We need an easier way to get loans and mortgages and to do bank transactions. It is vital for Saba’s development to have good banking services. Something needs to happen.”

The accessibility to Saba and a better banking infrastructure are regularly discussed in talk with the Dutch Government in view of the island’s economic development.