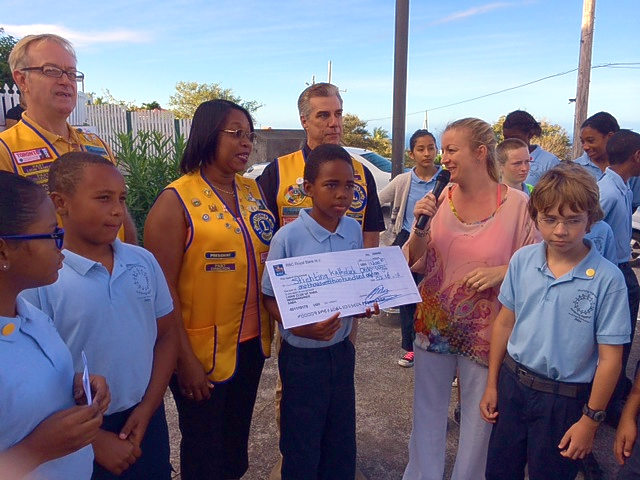 SABA–The Saba Lions Club marks its 40th anniversary of its Charter as club today, June 6. This is a milestone celebrated by all Lions, who have embraced the goals and core principles of Lionism as a means of humanitarian service for four decades.

The Club, like no other locally, has made its mark also within the region, as it has produced two District Governors early on in its history, said the Club. The impact of Lionism on the community at large, and in particular on the most vulnerable in the community, being the very young, the shut-ins and the elderly continues to be evident to date.

To celebrate the Club’s Anniversary, a public open house will be held in Eugenius Johnson Centre on Thursday, June 8, from 5:00pm to 8:00pm. Together with three of Club’s partners, the event will showcase the work the Lions have done and are continuing to do for the community. Refreshments will be served along with other surprises.

At 5:15pm, the open house will be declared open by Saba Governor and Lions Club Member Jonathan Johnson. Club President Carl Buncamper will address attendees on behalf of the club. The event will be closed at 7:45pm by Commissioner for Social, Youth, Culture and Education Rolando Wilson, who is also a club member.

In the past four decades, the Club has been instrumental in providing much-needed medical equipment and supplies to A.M. Edwards Medical Centre and Home for the Aged.

Directly after being chartered, the Club settled down to work and got involved with community service. The Club has impacted the lives of quite a number of Sabans by organizing glaucoma screening programmes, providing eye glasses for those who were in need of them and hearing aids for persons who had suffered significant loss of hearing.

The Club adopted the hospital and home for the aged by purchasing and sponsoring much-needed medical equipment, ranging from hospital beds, an EKG machine, incubators and other vital equipment which was lacking at the hospital.

Areas such as feeding the elderly and needy in the community have always been big on the Club’s agenda. The local educational institutions, including the Day Care Centre, have benefited and continue to benefit from the input of the Lions Club.

Eye glasses have been sponsored for the needy; hurricane baskets have been provided, and trails have been funded and/or taken care of.

Many other organizations embracing worthwhile causes, also within the core areas of Lionism, have been supported through the Lion’s partnering efforts and/or support to such organizations over the years.

A few noteworthy organizations include Child Focus, The Saba Triathlon, The Body Mind and Spirit organization, the Sea and Learn Project and recently the LIFE project.

The Club also focuses heavily on youth by sponsoring a Leo Club. This effort will once more be enhanced come August within the school setting. This project is fully supported by the school board and the directorate of the school.

The Club shifted its focus in the last decade around partnering with the various stakeholders on the island. By partnering with stakeholders, the club and the institutions/organizations involved are able to broaden or deepen their impact on the lives of practically all Sabans, and reach even more of the community at large.

The Saban community has come to rely heavily on the humanitarian services provided by Saba Lions Club and others in the community. Funding agencies in the Netherlands have recognized the importance and quality work provided by the Club and other organizations/institutions on the island. They are willing to fund various projects, especially for the elderly and the very young or underprivileged members of the community.

The Club was paramount in the establishment and execution of the Saba Summer Festival (Carnival) from the late seventies for about two decades, and indirectly remains involved in the island’s Summer Festival to date.

Another signature project that the Club has entertained pretty much since its inception is its Santa’s Parade and Gift Giving. The parade component is open to the public and the gift giving focuses on children ages zero to eight. This activity has shifted really from a need to a tradition of sorts, and is a much-anticipated event during the month of December, as is the Annual Christmas Tree Lighting event.

As the Club continues to serve the community, focus on key areas within Lionism will continue to be the Club’s guiding tool, but the club is keenly aware that the needs at home supersede all else. The good thing is that this is achievable with the oldest and largest organization’s goals of Lions Club International as the umbrella organization which will celebrate its 100th Anniversary on June 17, said the Saba Club.