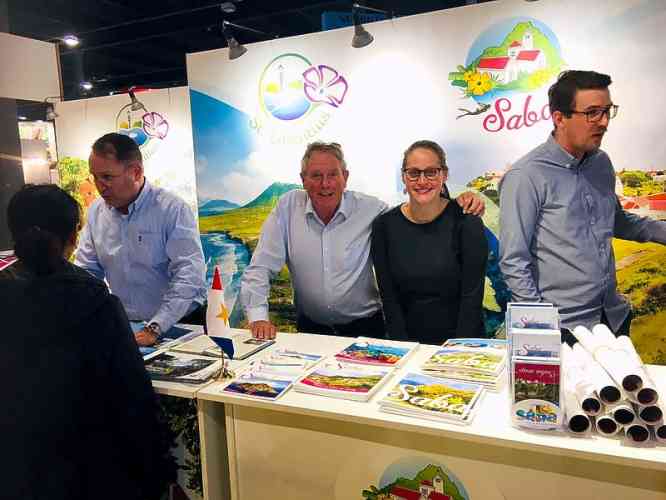 Cees Timmers of marketing company TVC and Dahlia Hassell (at centre from left) in the Saba stand at the Vakantiebeurs travel show.

SABA–Saba made its mark during the annual Vakantiebeurs travel show, which was held January 9 until January 14 in Utrecht, the Netherlands.

Saba has been attending this travel show for many years. Unfortunately, this year Director of Tourism Glenn Holm could not attend the show due to medical reasons, but Saba was still well represented by marketing company TVC, which has been working with Saba for more than 20 years.

Dahlia Hassell and Jarno Knijff, who have both worked for Saba Conservation Foundation, also attended the show during the weekend and were able to use their experience and local knowledge to help promote the island.

The Vakantiebeurs is one of the most well-known trade shows in the Netherlands and the report from the Jaarbeurs organisation indicates a total of 105,000 visitors to the 2018 show. Statistics show that 70 per cent of these visitors are interested in a vacation outside of Europe.

Saba’s quick recovery from Hurricane Irma and its accessibility were promoted and visitors were intrigued to learn more about the destinations which were recently in the media with King Willem-Alexander and Queen Máxima’s visit to St. Maarten, St. Eustatius and Saba in early December 2017.

Commissioner of Tourism Bruce Zagers said he was “happy” to hear about the big turnout to the show.

“With the events of last year, it was important to show that Saba is still open and ready to receive visitors. TVC kept us updated and we were pleased with the interest shown in Saba. We hope to welcome some of these travellers to our island soon,” Zagers stated.