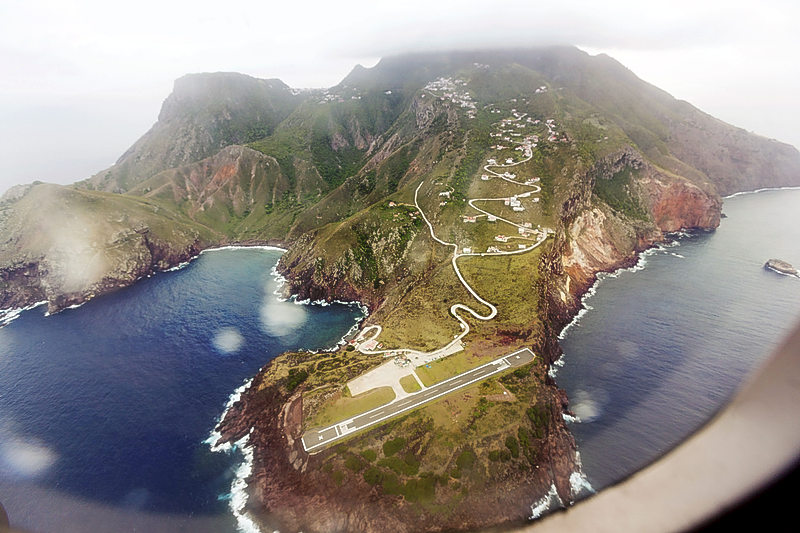 Saba’s Juancho Yrausquin Airport and a large part of the island seen through the window of a Winair aircraft. (Photo by Cees Timmers)

SABA–Saba’s Juancho Yrausquin Airport has been nominated on this year’s shortlist of the Most Scenic Airport Landings poll of the PrivateFly.com booking website for private jets. Commissioner of Tourism Bruce Zagers encouraged everyone to vote.

Annually, PrivateFly.com, a United Kingdom (UK) based global booking service for private jet charter and private aircraft hire with a network of over 7,000 accredited aircraft, runs a Most Scenic Airport Landings poll to discover the most beautiful airport approach of the year. Voters, who have until February 28 to enter their most favourite nomination, will determine the top 10.

An international panel of expert judges from across the travel industry were asked to nominate their favourite airport approaches for the airport poll. With the help of the 19-member panel a shortlist was put together of global airports that the experts considered “significantly spectacular.”

Saba’s Juancho Yrausquin Airport was among the 36 airports landings that were selected. Also on the short list are the St. Maarten Princess Juliana International Airport, which was the 2013 winner of the poll, and the airport of St. Barths, as well as the Douglas Charles Airport in Dominica. A link has been posted on the website of the Saba Tourism Office to make voting for Saba easier.

According to PrivateFly.com the list includes iconic city views, tiny remote mountain runways and unique beach landings, with some airports appearing on the list each year, plus a number of new airports entering the poll.

Saba is a favourite of one of the aviation experts on the panel that made this year’s selection. Seth Miller, a world traveller turning 150,000 plus miles annually and airline loyalty programmes expert stated about Saba: “Landing is essentially playing a game of chicken with a mountain sticking up in the middle of the ocean. Aim right for it and at the last possible moment a sharp turn to drop down on the shortest active commercial runway in the world. Gorgeous scenery and more than a little bit of excitement along the way.”

Voters of previous PrivateFly.com polls said about the 2013 winner SXM Airport: “The approach begins over an expanse of blue Caribbean sea, coming in so low  and close to the beach you can almost read the sunbathers’ newspapers below. It literally takes your breath away.”

Aviation blogger/consultant Miquel Ros, a member of the expert’s panel, is a big fan of the St. Barths landing. “The St. Barths Airport is located in a rather challenging and constrained location, with hills on three sides and the sea on the other. The approach usually involves an approach that takes the aircraft within meters of the island’s main road and then there is a very steep dive, to end near the beach.”

Aviation journalist Chris Kjelgaard, and also a member of the panel, stated about Dominica’s Douglas Charles Airport: “The approach involves a long, curved approach avoiding Dominica’s highest mountain Morne Diablotins and a short, final approach down a narrow gully overhung by tree branches at the top.”

Last year’s top airports included beach runways, mountain-top airports and airports approaches across stunning city skylines. The 2016 winner was Malta Airport, while in 2015 Queenstown Airport in New Zealand had the honour of having the most scenic airport landing. Launched in 2008, PrivateFly.com is the fastest growing private aviation company in Europe.