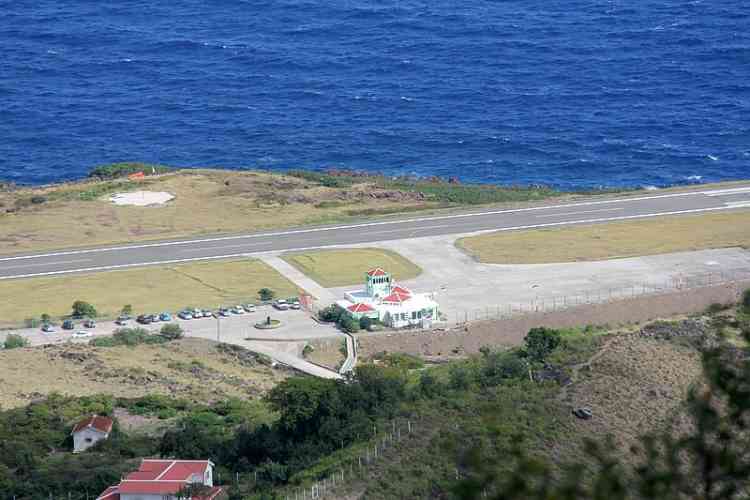 LONDON–Saba’s Juancho Yrausquin Airport and St. Maarten’s Princess Juliana International Airport made the Top 10 of the 2018 global travel poll of the world’s most scenic airport landings. Saba made number five in the poll, and St. Maarten number nine.

Saba won Most Scenic Airport Landing in last year’s poll, conducted by the private jet booking service PrivateFly, while St. Maarten ranked number seven in 2017. The results of the poll were announced on Tuesday.

A panel of major names in the travel industry formed the shortlist for the “Most Scenic Airport Landings 2018” poll. People from all over the world were invited to vote a few months ago and were asked to motivate their choice of a particular airport landing as their favourite.

About Saba, voters said: “It is thrilling! You see Saba in the distance, then closer and closer. Saba fills the window, you turn, and drop, and land! What a ride!”; “Reminds me of the epic images from the first King Kong movie. Landing on a volcano is an ultimate challenge and visual experience”; and “Having the mountain on the right, ocean on the left, and cliffs at both ends of the runway makes for an awe-inspiring landing.”

The PrivateFly website described Juancho E. Yrausquin Airport as the shortest commercial runway in the world, only 1,299 feet long, and flanked on one side by high hills, with cliffs that drop into the sea at both ends. Jet aircraft are unable to land here due to the runway length, but small aircraft and helicopters can.

St. Maarten’s Princess Juliana International Airport also received many compliments, including from Aviation Queen and from travel writer and one of the jury members of the PrivateFly airport poll Benet Wilson.

“Although St. Maarten and Princess Juliana International Airport are still recovering from the aftereffects of Hurricane Irma, it is still my pick for the most stunning landing. Aircraft make their final approach low over a short beach, a two-lane road, right onto the runway. Upon landing (and take-off), there’s a direct view of the hills. Planes swoop so low they can actually see beach-lovers and aviation enthusiasts clearly. It is a once-in-a-lifetime experience that everyone should experience at least once,” stated Wilson.

Voters said about the St. Maarten landing: “There are not many places in the world where you have the ocean, beach, tourists and aircraft next to each other. Experience the excitement of everyone on the beach when the planes approach the landing strip right above their heads. It’s simply unique.”

Other voters said: “There’s nothing like flying in over the navy, lighter blue, then clear turquoise waters and beach before landing”; “Because it is the BEST! Can’t get any closer to the planes than at the St. Maarten airport”; and “There is nothing as breath-taking as seeing the planes fly right over your head at Maho beach right before the runway of PJIA on St. Maarten. Feeling like by stretching out your arm you would be touching the bottom of the plane is so unbelievably exhilarating!”

PrivateFly described Princess Juliana International Airport as being located next to one of the island’s most popular beaches. Private jets and commercial airliners land and take off just over the heads of sunbathers. Sunset Beach Bar is mentioned. “At the end of the runway is the Sunset Bar – a favourite with plane spotters.”

According to PrivateFly CEO Adam Twidell, the “Most Scenic Airport Landing” poll has become an annual checklist for aviation and travel fans. The five other airports, besides Donegal, Barra, Nice, Saba and St. Maarten, that made the top 10 were: Queenstown Airport in New Zealand (4), Orlando Melbourne International Airport in the USA (6), Toronto Billy Bishop in Canada (7), London City Airport in England (8) and Miami Airport in the USA (10).