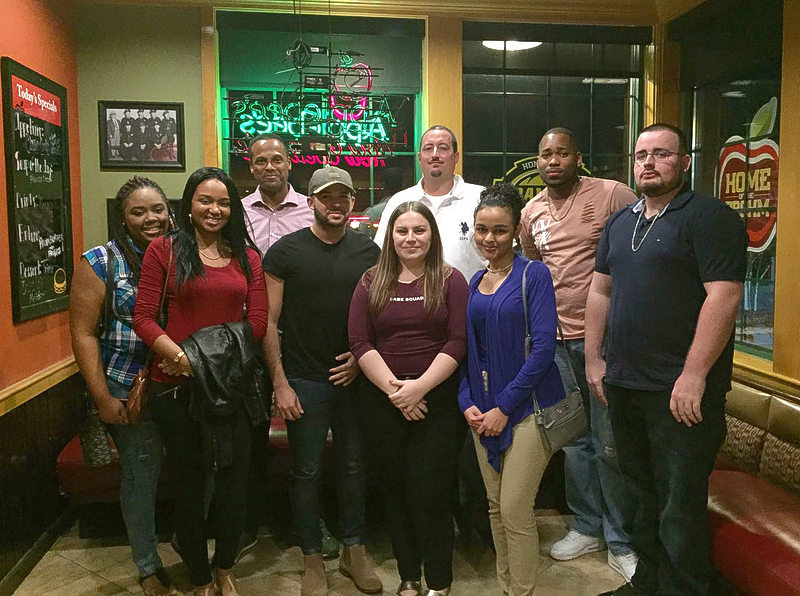 SABA–Saba’s Commissioner of Education Bruce Zagers and Island Secretary Tim Muller recently returned from their extensive tour of United State colleges and universities which included visits to six schools in five states. Agreements that will benefit Saba students were signed with three schools.

These schools either currently have students from Saba enrolled or have expressed a willingness to work with Saba and have offered special grants and or tailor-made programmes for the island’s students.

The initiative for a college/university tour started last year when Commissioner Zagers negotiated and signed the first-ever Saba Government College Agreement with Flagler College in St. Augustine, Florida. This agreement will give Saba students upon acceptance by Flagler College a grant of US $2,500 and depending on the student’s grade point average (GPA) the grant can be as high as $3,500 per academic year.

Zagers explained that although there is no formal role for the Island Government where it concerns decisions made by school boards, the Ministry of Education, Culture and Science OCW or study financing, the Saba Government finds it important to assume a more facilitating role.

“As a government, we want our students to be successful and we want them to be able to take advantage of the best possible opportunities available,” said Zagers, who added that visiting the six colleges and universities was a first step in exploring the possibilities.

Zagers was able to sign agreements with the Pittsburgh Technical College, Lindenwood University and Indian Hills Community College. The agreement with Lindenwood University entails grants for Saba students up to $7,760 per academic year, while the one with PTC will allow for Saba students to get a grant of $5,000 per year. The Indian Hills Community College involves a discount of $600 per year.

“Being able to sign agreements with some of these schools improves communication so that we can better prepare our students and more importantly make studying at these institutions more affordable,” said Zagers.

The Island Government has already adapted its policy and starting with the graduating class of 2015-2016, each student who leaves for tertiary education purposes will receive a laptop. This was announced by the Commissioner during the most recent Saba Comprehensive School (SCS) graduation.

The first school visited by Zagers and Muller was the St. Thomas University in Miami which has been receiving Saba students since the 80s. STU has approximately 5,000 students enrolled of which six are currently from Saba.

Although no formal agreement was signed with STU, there is a willingness on both sides to finalise an agreement once more research is completed. Saba will seek clarity from the Study Finance Department as there have been some difficulties with students receiving scholarships for certain programmes at this university.

The next stop was the Universal Technical Institute in Orlando. UTI offers certification programmes in auto, diesel, marine and motorcycle mechanics, and hydraulics. The impressive campus is one of the recognised institutions of its kind in America. Although no formal agreement was made with UTI, a tailor-made programme will be worked on for high school graduates and a special programme will be explored for civil servants.

Zagers signed an agreement with the all-around PTC College in Pittsburgh. PTC offers bot technical and academic programmes, and enrols some 2,000 students. Currently there are no Saba students attending PTC, but there are two St. Maarten students. Zagers and Muller met with one of the St. Maarten who was very positive about her experience at PTC.

An agreement was signed with PTC which will allow for Saba students to get a grant of $5,000 per year. The Saba delegation was very enthusiastic about PTC and was impressed with the facilities, the support programmes for international students, the services offered and the family like environment.

The visit to Indian Hills Community College in Ottumwa was familiar territory for Saba as the island has been involved with this school for many years. The IHCC had recruiters come to Saba in the past for presentations to students and parents. Currently IHCC has some 4,500 students enrolled of which seven are from Saba.

An agreement was formalised with IHCC which will give Saba students a discounted rate of $600 per year. Although this amount is lower than what has been agreed upon with the other colleges, Zagers explained that the tuition fee which includes housing, a meal plan and insurance, is also significantly lower than the fees from the other colleges and universities. Representatives from Indian Hills are planning a recruitment trip to Saba in the fall of 2017.

Lindenwood University near St. Louis has the highest number of enrolled students out of the schools that were visited. Currently there are some 15,600 students enrolled of which 800 are international students representing 94 different countries. So far only one Saba student is enrolled, but the school does have experience with other Caribbean islands.

Although Lindenwood is somewhat bigger it does have the small, family feeling with an impressive campus. Athletics are very popular at this institution as they have approximately 50 per cent of the total enrolment in various sporting programmes.

An agreement was signed with Lindenwood University granting Saba students $7,760 per academic year. The Saba delegation feels that although Lindenwood is the least known of all the academic schools visited, it is an attractive and affordable option for students who wish to leave right after high school or transfer from a community college.

Next on the college tour was the Lipscomb University in Nashville with which Saba has had a special relationship since 2002, when then medical student Michael Thomas and his wife Aletha moved to Saba for Thomas to attend the medical school. This spring marked the 15th anniversary that students from Lipscomb have visited Saba and this summer will be the sixth consecutive year that the Lipscomb group will be organising a summer camp for the Saba children.

Currently there are two students enrolled in the undergraduate programme and one in the graduate programme. In total Lipscomb has 4,570 students and applies a holistic approach to education with very strong and highly-ranked educational programmes while emphasizing good character building.

Although no formal agreement with Lipscomb was signed during this visit work has already started to see what can be offered as grants for the Saba students. It is expected that an agreement will be signed in the coming weeks.

During the casual meetings with the Saba students at the various schools concerns were expressed about the communication with Study Financing; this will be brought to the attention of the relevant stakeholders, said Zagers. Saba will also continue to promote the concept of having a short list with preferred colleges and universities. This will ultimately make processing time for study finance applications far more efficient for these so-called preferred schools.

Zagers and Muller said they were impressed with all the visits and were enthusiastic to build stronger relationships with these institutions. “It was a pleasure to visit all of the various institutions and it was a humbling experience to see how much of a warm reception we received from everyone including school presidents to student guides,” said Zagers.

“We enjoyed meeting with the Saba students to see first-hand how they have adapted to campus life, and to hear their experiences both good and bad. This visit has given more insight into how we need to prepare our students for when they wish to travel abroad to further their education,” said the Commissioner, who pointed out that there were also many possibilities for tertiary education in the Netherlands, Canada and the Caribbean. A newsletter will be created shortly with ample information for distribution to students and their parents.

Zagers further announced that as a follow-up to the successful internship programme that the Saba Government hosted the last two summers, there will be a special internship this summer which will focus on creating a handbook for students who wish to study abroad. The interns will also do a labour market survey to see what positions are needed for the coming five years.

In addition, the interns will put together a public relations plan which will be geared at promoting technical education. The students will further review the existing local government education policy to see if budget-neutral modifications can be made.