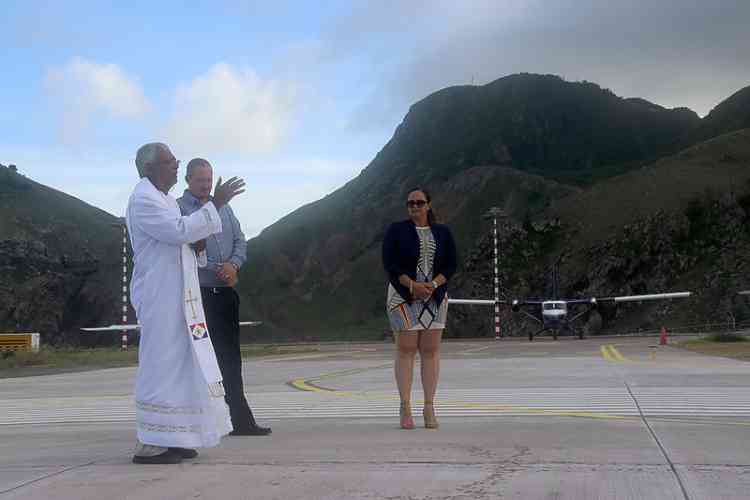 SABA–After 28 days of rehabilitation of the airport runway and renovation of the airport building, Saba’s airport runway was ceremonially re-opened Monday afternoon with inaugural flights by Windward Islands Airways International Winair and Windward Express. Juancho E. Yrausquin Airport officially opens for air traffic and will be fully operational today, Tuesday, from 7:00am.

The works at Saba’s new airport runway were concluded by the end of September, with the contractor busy placing brand-new markings on the concrete runway, taxiway and apron, and finalising the shoulders of the runway during the course of last week.

Final checks by the Ministry of Infrastructure and Water Management’s department of Rijkswaterstaat and the Human Environment and Transport Inspectorate were also carried out this past week. Test flights also preceded Winair’s inaugural flight.

The new air taxiway from the runway to the new helipad is still under construction. On the request of Rijksvastgoedbedrijf, construction of the road to the soon-to-be-built rescue and firefighting station is also currently in progress. All of these works will continue after the airport’s reopening, but will not interfere with air traffic.

The renovations were funded by the Ministry of Infrastructure and Water Management, coordinated over the past two years by Ton Fransen of the ministry’s Civil Aviation Department and executed by contractors Den Ouden, Windward Roads and Saba Roads.

Renovations also took place on essential elements of the terminal building during the airport closure from September 10.

Terminal renovations already started mid-August and will continue, as the focus is now on the renovation and expansion of the East and South sides of the building and finalisation of the interior, which will include an air-conditioned waiting area. Construction will continue through December 2018.

Passengers will notice that work is still in progress, but the work planned will not hamper airport operations, and the impact for passengers will be minimal, according to the public entity.

The runway renovation was deemed necessary, as the runway’s condition was deteriorating rapidly, said Airport Manager Maegan Hassell. “An airport runway in a bad condition is a very high risk,” she explained, calling Saba’s renovated airport the “newest airport within the region.”

Fransen, who is responsible for airport safety in Bonaire, St. Eustatius and Saba, explained why the old layer of asphalt was replaced by concrete. The answer is quite simple: Saba does not have an asphalt plant, which makes runway maintenance virtually impossible. “And where an asphalt runway has a lifespan of between 10 and 15 years, a concrete runway lasts for between 30 and 35 years,” Fransen explained, meaning that concrete is also a lot cheaper.

Commissioner of Harbour and Airport Affairs Bruce Zagers said the airport runway has been milled, levelled, paved with concrete and painted with new runway markings, and lights have also been installed.

In pointing at St. Barths concrete runway, he said that concrete is just as safe a surface as asphalt, as the airlines operating in Saba had never experienced any problems while taking off and landing in St. Barths.

“Basically, we have a brand-new runway in only 28 days. For many this seemed like an impossible feat, yet here we are today, on schedule, and with two planes parked on the apron for the ceremonial opening a day before the airport is officially open for commercial flights. Tomorrow, bearing any unfavourable weather conditions, Winair will execute flights with passengers as planned,” Zagers said.

He said the decision to close the airport for a month during the peak of the hurricane season was “bold” and came with risk. “However, it was either that or the certainty of a heavy economic impact at a different time of year during the tourism period.”

Fortunately, Zagers said, the island was spared from hurricanes and bad weather and the project could be finished on time.

He said that with the compensation budget to offset economic losses due to the airport’s month-long closure without any flights, the public entity had been able to negotiate with ferry operators Dawn II, Edge and Great Bay Express to establish US $20 rates for daily ferry schedules between Saba and St. Maarten.

“With these very cheap rates we saw at least 3,000 passenger movements between Saba and St. Maarten, which is an increase when compared to previous years during the same period with airlines and ferries included. We have seen people visit from St. Maarten and other neighbouring islands who have not been here in many years and in some cases not at all. We saw people travel from Saba to St. Maarten who normally do not travel simple because they cannot afford to do so,” said Zagers.

Statistics will prove that the cost of travelling between Saba and St. Maarten is a substantial factor that hinders Saba’s potential for tourism and negatively impacts the cost of living and the cost of doing business, he said.

“Although this should be common knowledge, we will now have proof which we can use to help us lobby for structural subsidies to reduce the price of travel,” said Zagers.