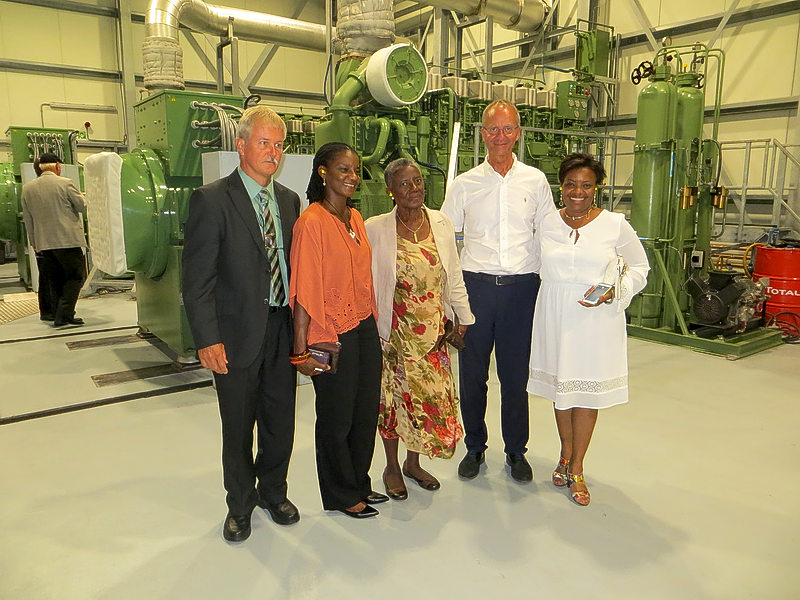 Before an audience comprising Members of the Executive and Island Councils, board members and staff of SEC and other invited guests, Minister Kamp said that the energy policy stipulates that the supply of energy should be reliable, durable, safe and affordable, and Saba’s new power plant serves all four of these goals.

The minister was on Saba for a two-day visit, with the opening of the plant being the highlight of the programme.

The old plant was situated at Fort Bay Harbour and had to be shut down when the seawater level was too high. The new plant is hurricane resistant.

Another improvement is the large stock of diesel at the plant, considerably reducing the chance that the plant runs out of fuel.

The new plant is also much safer than the old one. In 2012, an engineer from the Netherlands took a look at the old plant. “He came back in shock,” according to the Minister. “For instance, the diesel tanks were positioned above the searing hot engines. The new plant fulfils all necessary safety measures,” Kamp assured.

Last but certainly not least, the power plant also makes electricity more affordable to the people of Saba. The Ministry of Economic Affairs has contributed significantly to financing the relocation and upgrade of the plant.

“The decrease of diesel use with 16 per cent is, therefore, benefitting SEC and thereby the population of Saba,” Minister Kamp said.

The Minister said that the opening of the power plant also marked a success for SEC, which he said was a “well-established and well-run company,” which was only re-established two and a half years ago. Up to that point, the electricity supply on Saba was in the hands of GEBE, with its main operations on St. Maarten.

“Independence from GEBE meant that the merely 15 employees of SEC were on their own. They are responsible for the entire electricity supply to your island: production, transportation, distribution, everything; for 24 hours a day, every day of the year. In case of problems, there is no lifeline to St. Maarten anymore. Yet, SEC has not only run the electricity supply very well, SEC has also established the new power plant. Few two and a half year olds have such an impressive track record,” Minister Kamp stated.

The opening of the new power plant, however, is merely one step in the process to reduce the consumption of diesel fuel for the production of electricity.

“After research and discussions we agreed in 2013 that 40 per cent of diesel consumption had to be cut to ensure that end-user rates would not have to go up. The first 16 per cent of reduction is reached with the new power plant. At least another 16 per cent will be reached with the development of the solar park for which a parcel of land is available,” Kamp said.

The solar park will be constructed in the vicinity of Juancho Yrausquin airport. The Ministry of Economic Affairs has made funds available for all cost involved with this entire project, including the laying of fibre optic cables. For the investment in a second solar park the public entity Saba and SEC have secured subsidy from the European Union, Kamp said.

“With this beautiful and efficient power plant and the plans for the solar parks, our shared goal is in sight: reliable, safe and durable electricity at affordable rates for the population of Saba,” Minister Kamp concluded.

The old power plant, which had been in operation for 43 years, was decommissioned on February 8. The new plant is located just a few 100 metres above the old plant, which was opened in 1973 to replace the island’s first power plant in St. John’s.

The facility took its name from the co-founder of the island’s first electricity company. In honour of Saba’s electricity pioneer, the new facility was opened in the presence of his widow Edwina Linzey. Minister Kamp left for St. Eustatius on Monday afternoon. He will be opening the solar park there, today, Tuesday.