Home Local News SAFE: No protection for LGBT community if laws not updated 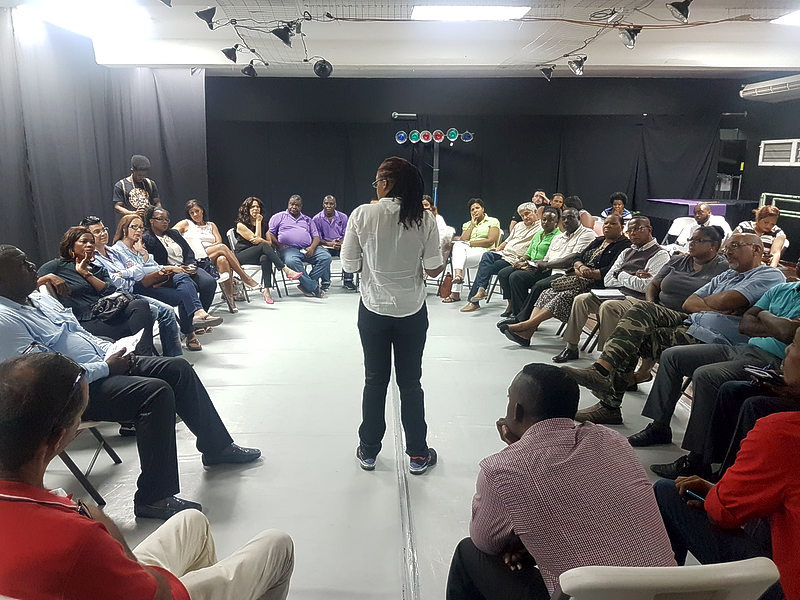 PHILIPSBURG–“Until the language of the laws of the land is updated, many protections cannot be enforced,” St. Maarten Alliance for Equality (SAFE) President Lysanne Charles-Arrindell told candidates contesting the September 26 Parliamentary Elections about the need to protect lesbian, gay, bisexual and transgender (LGBT) community.

All nine political parties were represented at the event and a number of candidates from each attended the session. All, but three – One St. Maarten People Party (OSPP), United St. Maarten (US) Party and National Alliance (NA) ­– sent their leadership to the session.
In an information exchange session in John Larmonie Centre on Tuesday, Charles-Arrindell pointed out that Article 16 of the Constitution protects against discrimination based on race, gender and religion, but excludes sexual orientation and gender identity from that list.
This has led to LGBT St. Maarteners being turned away from civil services such as the police force, and being faced with increased bullying at their places of work and learning, in the case of young LGBT individuals, she said.
SAFE organised the gathering on Tuesday, as “a springboard for future discussions with incoming members of parliament regarding equal rights for all St. Maarteners.”
Charles-Arrindell highlighted the plight of many LGBT persons in the community including bullying at home and at school, threats of violence by family and strangers, and discrimination in the workplace.
LGBT experience stories were shared by each SAFE board member ranging from stories of support from one transgender individual’s parent to stories of severe discrimination, bullying and attempted suicides by young LGBT St. Maarteners.
Each party gave their stance on the issue of equal rights and same-sex marriage. All parties commended SAFE for its stance and work.
“Standout” statements, according to SAFE, came from Democratic Party (DP) leader MP Sarah Wescot-Williams, who admitted that there was still a considerable struggle ahead for equal rights and same-sex marriage, which she said the DP supports. She urged SAFE to maintain the pressure even after elections, to ensure that those who pledged support were held accountable.
OSPP candidate Denissen Philips gave “a touching statement” that he may not agree with “the details,” he would love his child the same if he/she told him that he/she were gay or lesbian.
St. Maarten Christian Party (SMCP) supports equal protections against discrimination, bullying and violence, but does not support same sex marriage as it went against their party policy.
Only one party, the United People’s (UP) party, had incorporated planning for addressing equal rights and same-sex unions in their manifesto. An excerpt was read aloud by UP candidate Tatiana Arrindell to the gathering.
The SAFE board is pleased with the outcome of this year’s pre-election meet and greet. The foundation had invited parties contesting the 2014 Parliamentary Elections and only received only two responses. The board hopes that this signals a step forward on the continued path towards full equal rights for all St. Maarteners.

Source: Daily Herald
SAFE: No protection for LGBT community if laws not updated