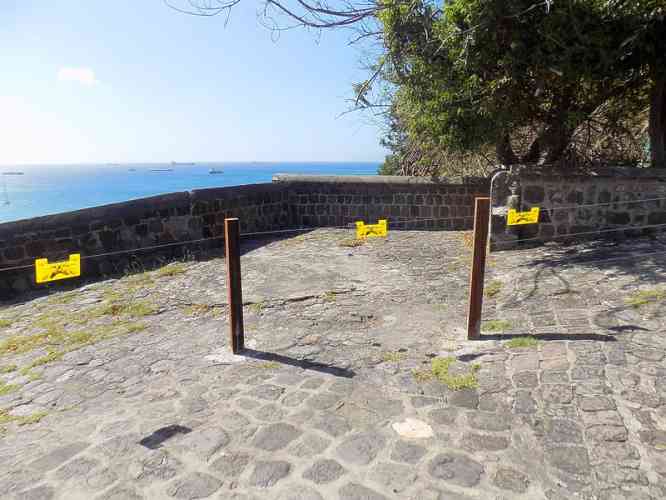 Fencing was installed to ensure public safety and to prevent further erosion of the cliff walls near Fort Oranje and the Bay Path.

ST. EUSTATIUS–Safety fencing was recently installed at Fort Oranje and the Bay Path to ensure public safety and to limit access to the eroding cliff walls in the area.

Workmen were seen placing fences along the cliff side of the Fort, as well as along the Bay Path. The fencing at the Path has been installed at the top end near the Roman Catholic Church and along the lower section to prevent anyone from walking in that area.

Residents and visitors were notified in October 2017 that there would be limited access to Fort Oranje, Bay Path and the surrounding cliff walls. The cliffs surrounding Fort Oranje and the Bay Path have been progressively eroding for several years.

Two studies on the erosion were carried out by international companies DAM Caribbean N.V. and Royal Haskoning DHV.

Hurricanes Irma and Maria wiped out most of the vegetation from the cliff walls, making the situation even worse. The Island Government then made the decision to limit access to Fort Oranje, the Bay Path and the surrounding cliffs.

The measure was taken to ensure public safety and to reduce the danger to persons, property and buildings, including the national monument Fort Oranje and the Bay Path.

Signs were posted at the entrance atop and below the Bay Path prohibiting the use of any type of vehicle on the Bay Path.

The limited-access policy also applies to roaming livestock. Owners and keepers of livestock are requested to ensure their livestock does not roam the cliff area, resulting in further erosion.

Persons working inside Fort Oranje, the general public and visitors making use of their services do not fall under the limited-access prohibition Monday to Friday during regular working hours, but are advised to keep a distance from the Fort walls near the cliff.