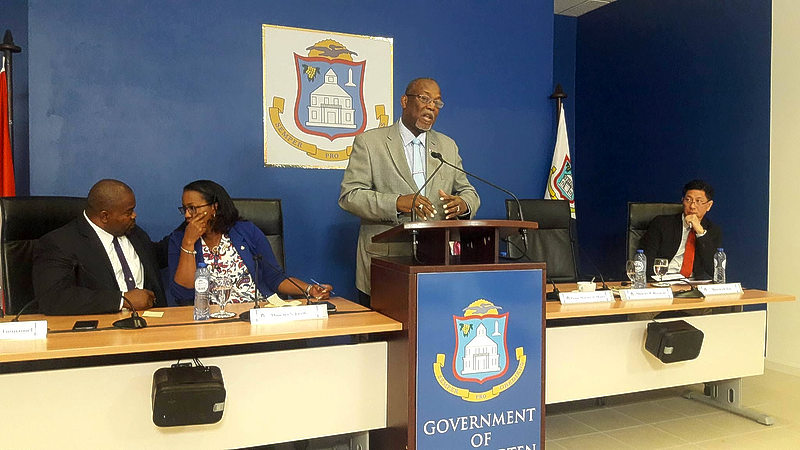 PHILIPSBURG–Minister of Justice Raphael Boasman hit the ground running and appeared at his first Council of Ministers press briefing on Wednesday with the message that the safety and security of the people of St. Maarten and its visitors remain top priority for his Ministry.

Boasman is concerned that illegal practices have become the norm and the population should realise that solutions should come from within rather than looking towards police and the Prosecutor’s Office.

“We have responsibilities; it takes all of us to develop a sense of respect. For example, if there is a sign that says you cannot park there and you go and park there and then complain about the consequences. But if you had stuck to the rules, you would not have to complain in the first place. We need to focus on doing what is right,” stated Boasman.

Prevention is another aspect at which Government needs to look seriously, according to the Minister. “We can build prisons but we need to also focus on keeping people out of prison. Especially our youngsters, we need to focus on ways and means that we don’t lose any more of our youngsters to the Justice system,” he said.

Boasman plans to work with the Education Ministry on preventing crime. He also noticed that persons had become accustomed to finger-pointing in the past months.

“We have to be also careful, I heard that when a robbery took place and young persons were involved, some people told me, ‘What do you expect them to do? They have no job.’ This is not the way to deal with society; it is not right for anyone to pick up a gun and decide to rob a business. We as responsible leaders have to be careful with what we say. Those are some of the areas, besides the urgent attention needed for the prison and police, that I intend to focus on,” he said.