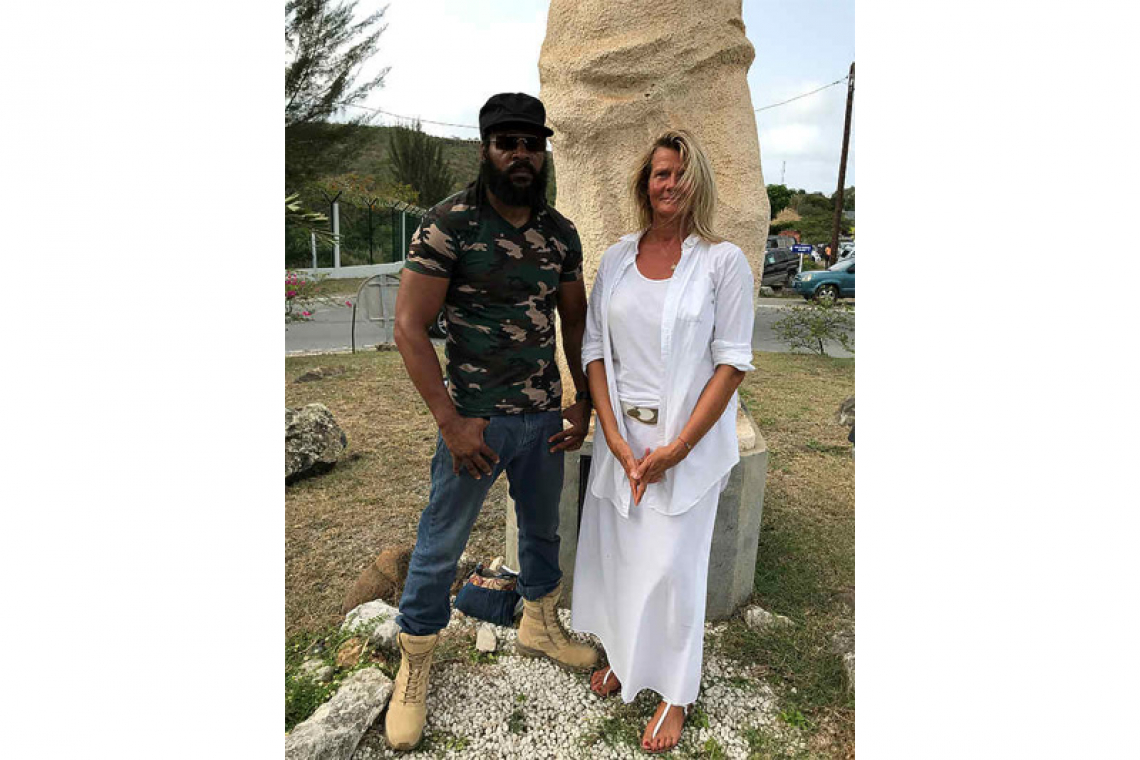 MARIGOT–Organisers of the protest planned for this coming Saturday, July 24, against mandatory vaccinations and introduction of a “health pass” on the French side, talked to the media Monday afternoon to give their reasons for protesting against control measures they consider an infringement on human rights.

The Lady Liberty statue in Agrément, a symbol of freedom, was chosen as the location for the press conference.

President of the Republic Emmanuel Macron implemented the new control measures on July 12 over worries of a fourth wave of the epidemic in France and spread of the more contagious Delta variant. Draft legislation was due to be adopted on Monday to rush through the measures.

It was understood from the Préfecture that all the measures will apply in St. Martin, however, confirmation of this is awaited when the decree is signed by the préfet.

“The cause of the protest is about our liberty and freedom of choice,” said Hodge. “We are not against vaccination but against mandatory vaccination. We believe everyone has a choice when it comes to what is injected into their body. This is about the manner in which everything has suddenly been imposed on us.

“It’s not going to be a peaceful protest, but not a violent protest either, so no white shirts. This is a protest in the full sense of the word,” he added. “There will be a march, but the route will be given on the day. We will not be blocking roads.”

Saint-Martin Resistance is not a collective, like some other groups, he stressed. “It’s a mobilisation of the people against dictatorship. A lot of people have worked to make this protest a success. It’s not about me, it’s about the people. I am just the spark to set it off. The population is the flame.”

Hodge disclosed he had been on PJD2 radio to talk about the protest, in anticipation of the southern side joining in.

“My prediction is, looking at the way this can or will evolve, that a health pass will be required to cross the border onto the French side, what’s to stop that from being implemented to protect the health of French citizens? Everyone could be concerned when it comes to the health pass … taxi drivers, bus drivers, it will affect all industries. You could lose your job if you are not vaccinated. We have just seen that in the letter McDonalds sent to its staff.”

Said William: “We want everybody to walk together for liberty and express themselves. We don’t want anything mandatory here. France is the freedom country and human rights started in France, so it is ironic we are seeing a complete reversal of that. Now there is no more choice. I want to be free to make my choices and so do the people I am talking with. There is fear now about all of this.”

William read out an article from the Parliamentary Assembly of the European Council that states the French government must not make vaccinations mandatory, but there must be a choice. She said France signed off on that as part of the rules of the European Commission.

Another article she quoted said children must be able to understand, and to say yes or no to a vaccination, and there must not be any discrimination between vaccinated and unvaccinated people.

“The European Council also warns that vaccination can affect your health and it must be a choice. The Council doesn’t agree with what is happening in France now,” she added.

Hodge said he did not declare the protest to the Préfecture because he feels he is “living under a dictatorship and not under a Republic.”

“For any form of oppression, resistance is a duty,” he concluded.

The gathering on Saturday at the Agrément roundabout will begin from 6:00am. Comfortable sportswear and adequate drinking water are recommended.