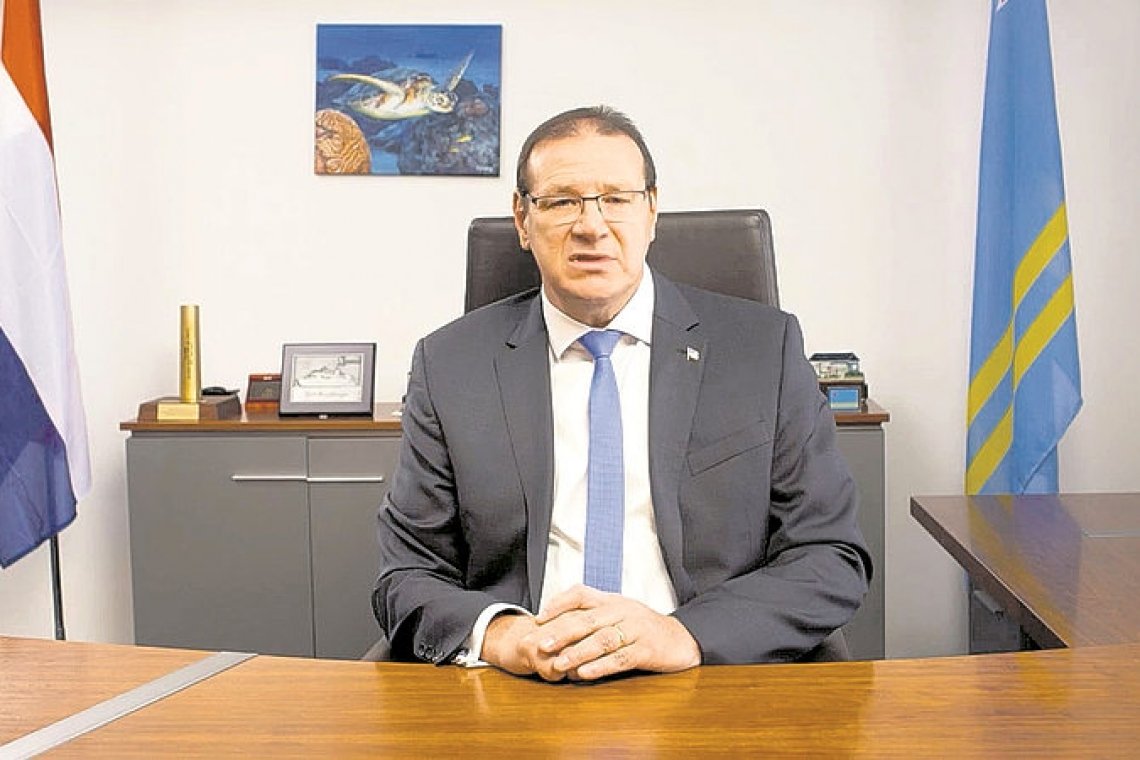 Governor of Aruba Alfonso Boekhoudt – in a special coronavirus-related national address – called for unity and understanding. As of Monday afternoon, the Dutch Caribbean country had 50 confirmed infections. Boekhoudt also asked the population to strictly follow the instructions of authorities, practise “social distancing” and “shelter in place.”

ORANJESTAD/THE HAGUE–Faced with a financial need of some 1.3 billion this year, the Aruba government anticipates that the public service – just like everyone else in the community – will have to make great sacrifices.

“The crisis that Aruba faces is one without precedent and the only way to get out of it is if everyone makes sacrifices,” stated Prime Minister Evelyn Wever-Croes during the handling of the 2020 emergency budget last week. The budget was adopted by a broad majority.

The Aruba government will be seeking a loan of 1.3 billion Aruban florins on the international financial market. Because Aruba does not fall under the same regulation as Curaçao and St. Maarten whereby the Netherlands subscribes to government loans with a low interest rate; Oranjestad will as usual have to borrow on the international market against a higher interest rate.

The approval of the Kingdom Council of Ministers is needed for this large money borrowing operation because the country will not make the budget norm fixed in the financial supervision law. The Kingdom government – in principle – approved a deviation from the budget norms for Aruba, Curaçao and St. Maarten during its meeting last Friday.

Wever-Croes acknowledged that the private sector which is heavily dependent on tourism is already suffering major blows. “Thousands of mothers and fathers are losing their jobs. Many companies will not survive and will close down. The private sector is facing great challenges, and it is a task of government to put in our two cents.”

This means that civil servants, Members of Parliament (MPs) and members of government will have to relinquish part of their salary if government is to keep functioning. Government will not have the means to pay all expenditures, Wever-Croes noted.

The prime minister said the greatest urgency at this moment was to secure the means to stabilise the general health insurance AZV and the Social Insurance Bank SVB so these vital institutions can assist people in need during this crisis. Government will support the AZV and SVB with an additional 429 million Aruban florins to keep them afloat.

According to Wever-Croes, the gesture that MP Allan Howell of the POR party made last week to cut the salaries of ministers and MPs by 1,000 Aruban florins per month was well-meant but by far insufficient. She said that much more than 1,000 florins were needed.

Finance Minister Xiomara Ruiz-Maduro during the handling of the 2020 budget explained how the Aruba government intends to deal financially with the current COVID-19 crisis. This will be done in three phases.

The first phase – calculating a ballpark figure of the financial damages – was already done by the Central Bank, the Central Bureau for Statistics and The Directorate of Economic Affairs assisted by the International Monetary Fund (IMF) and Standard and Poor’s.

Phase two consists of finding the funding to cover the expenditures of AZV and SVB. The Aruba Parliament approved this step on March 24, and government can now start the search for this funding. Phase three includes a drastic reduction of government expenditures including the cost of personnel and salaries.

The emergency budget that Parliament adopted last Tuesday contains an economic package for two groups: dismissed employees and small and middle-sized entrepreneurs. For the first group, government will make 214 million florins available and for the second group 40 million florins. Local business associations have already stated that this is by far not enough.