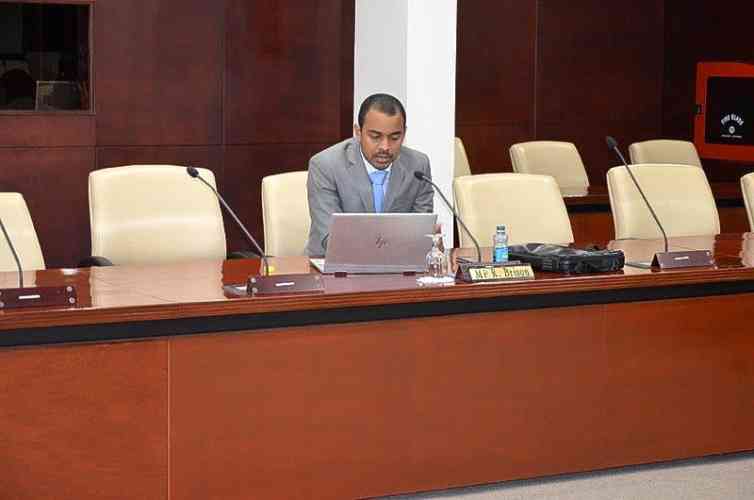 PHILIPSBURG–United St. Maarten (US) Party Member of Parliament (MP) Rolando Brison said on Tuesday that the sale of United Telecommunications Services (UTS) will not result in any job losses.

He was at the time speaking in a meeting of the Central Committee of Parliament, answering questions posed by MPs on his draft initiative law aimed at authorizing government to undertake the sale of St. Maarten’s shares in UTS.

Brison said as per a presentation of UTS at a recent staff meeting, the sale of UTS itself would not result in any job reduction. “The company (buyer) cannot, however, discount other unforeseen factors not related in any way to the sale of UTS minority shares such as natural disasters and/or huge economic downturns causing that in the future. However, the dilution of the shares and absorption of debt would surely mean a cut in jobs; in order to justify the increase in costs,” Brison said.

St. Maarten holds 12.5 per cent shares in UTS, while Curaçao as majority shareholder holds 87.5 per cent. Curaçao has already completed the sale of its shares to Cable and Wireless Communications’ parent company Liberty Latin America. The June 1 deadline for the sale of St. Marten’s shares has already passed, but after conversation with the buyer some time was granted to get a national decree passed parliament.

Negotiations are still ongoing concerning one entity of the holding that was not sold (Data Planet, which is based in Curaçao).

In providing an update on the situation with Data Planet, Brison said this entity was excluded from the sale and was placed in a separate foundation that puts the company on the market. The company had a negative cash flow and separating it from the deal increased the price of St. Maarten’s shares. “The potential buyer/investors are already in the data business and have the potential to upgrade and replace and expand market accessibility. The sale price of the shares is calculated based on the projected net income from existing contracts. The estimated sales amount is between US $19 million and US $20 million approximately.”

In responding to a question as to what options were available other than selling to Liberty Latin America, Brison said: “There were several options on the table according to UTS’ presentation. The most prominent of which was a merger between TelEm and UTS, but by May 2016, the decision was made to (sell to Liberty Latin America).”

Brison had said earlier that the entire UTS “deal” with Cable and Wireless Communications parent company Liberty Latin America is “about” $100 million, after corrections made due to debts and claims. Part of the money for the UTS sale will remain in an escrow account in the United States – $10 million for six months and $30 million for two years – as collateral “for possible skeletons that might surface later.”

After the corrections, the part of the sale price for St. Maarten is estimated to be in the vicinity of $11.5 million or NAf. 20.7 million. The St. Maarten shares will be sold in the Curaçao deal under the same conditions that Curaçao sells its shares.

Brison said Tuesday that his draft law has no bearing on the price at which the shares will be sold, as this is fixed to the same price per share as was offered to Curaçao, which has already agreed and is the majority shareholder.

Asked how he managed to finalise his draft law in record time, Brison said the law is very clear about how the sale of shares should be done, therefore the guidelines for writing the law already existed in the accountability ordinance.

“The next step was to ensure that the correct legal support was available. The hardest part of the work is ensuring your law can comply with as much as possible with the Raad’s advice. That took many hours of work – I estimate between 80 to 90 hours of work, research, consultation and writing. The most frustrating part was actually getting the answers form the Minister of Finance. But it appears this was based on some miscommunication and was sorted out. More information on what I learned about this process can be found in the presentation that has been given to members of parliament under learning points,” Brison said.

Asked how the current draft budget amendment addresses the receipt of the funds from the sale of UTS, Brison said the budget does not show the revenues from UTS. The correction has to be made in the balance sheet as per December 2019. There a shift is to be found on the active side (liquidity goes up) and on the passive side foreign capital goes down with the same amount. No result will be realized.