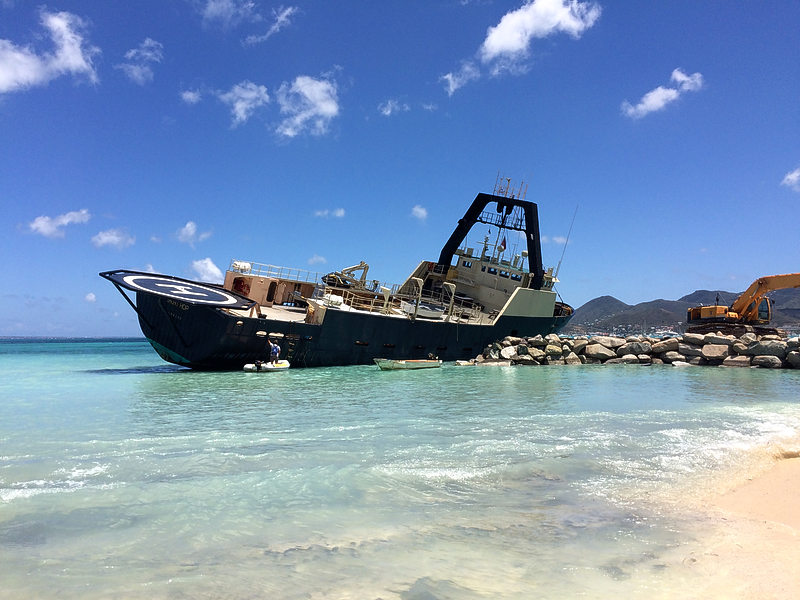 MARIGOT–Salvage company Seacure Marine Construction indicated Friday it hopes to be able to re-float the steel-hulled ship Yacht Hop and remove it from the Baie Nettle beach in about two days from now.

The ship drifted towards the Baie Nettle Beach about a month ago after dragging its anchor during the night in bad weather. Since then it has become an eyesore for residents of apartments on the beach in the area of Nettle Beach Club.

Several efforts to remove the UK-registered vessel have been thwarted by bad weather and sea conditions. Originally it was stuck on a sand bar further out but adverse weather conditions drove it further in towards the beach.

One side of the ship is currently resting on a ledge, the composition of which is thought to be hard clay, giving the ship an appearance of listing to one side.

Seacure Marine’s managing director Steve Coetzer said the situation is not as bad as it looks.

“We’re using an 8,000lb anchor and windlass to winch it off gradually,” he explained. “We’ve moved it forward and sideways already. The swells are actually helping us to float it. Pulling it out with a tug is not an option because it’s too shallow there.”

Oil booms were recently placed all around the ship and there appears to be no evidence of pollution.