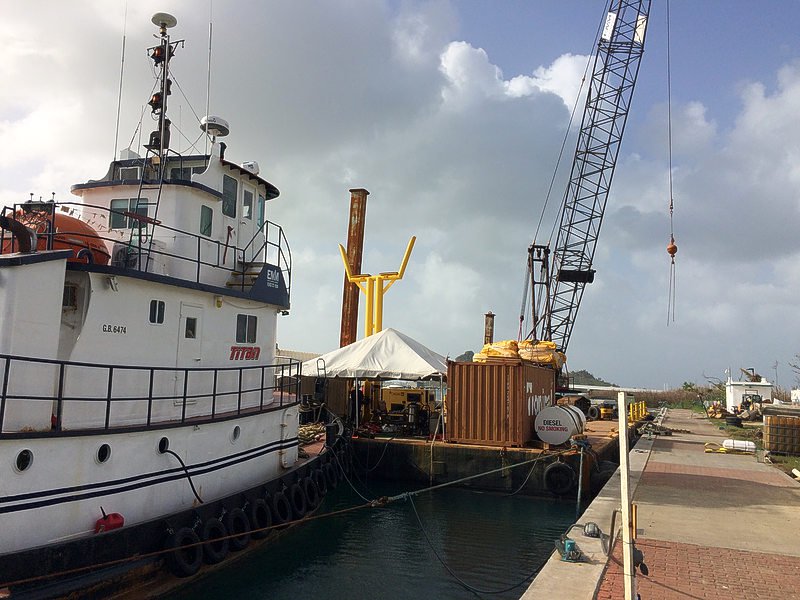 SIMPSON BAY–The barge and 150 ton crane brought down to the island by Yacht Club Port de Plaisance to salvage yachts, particularly the vessels over 100ft, are currently prohibited from operating until issues with the tug’s paperwork and registry are regulated.

The barge and crane belonging to Executive Marine Management (EME) from the Bahamas arrived a week ago, the hold is causing more delay to vitally important salvage operations needed to clear the Simpson Bay Lagoon and marinas and mitigate further environmental damage.
Yacht Club Port de Plaisance General Manager Jesse Peterson indicated the marina was being held accountable for “technicalities” with the tug and barge.
“We followed all the maritime requirements in terms of crossing international waters, a Class A tug brought the barge and other tug down here, but Maritime Affairs is not allowing us to work as some of the requirements have not been met,” said Peterson. “But we haven’t been issued with a fine and we have not been given a report yet. We were told that the tug that will be working here is not Class A certified.”
Maritime Affairs Inspector Paul Ellinger confirmed there are “deficiencies with equipment” and is working to regulate the issues. He added there is also a flag state issue between St. Maarten and the vessel’s flag state registry.
“We weren’t aware of any infringements or requirements that we needed about the tug for international standards,” added Peterson. “For one reason or another we didn’t see or understand the requirements. We missed that but we contacted the boat’s registry in the Bahamas and the Maritime Affairs over there and they offered to come here and register the boat over here with the right requirements. We’re working with them but don’t know yet if we can continue. We would be happy to pay a fine to continue. Right now we have the biggest outfit able to lift the largest vessels.”
Peterson noted St. Maarten Nature Foundation representative will be present at each salvage. Permission has also been obtained from the owner of Port de Plaisance to place wrecks on his land temporarily.
EME’s Salvage Master Gary Simmonds said the tug that’s working with the barge is a 1959 B class tug. The crane itself can lift five boats per day.
Meanwhile Ministry of Public Housing, Spatial Planning, Environment and Infrastructure VROMI Acting Division Head of Inspection, Claudius Buncamper, disclosed two salvage permits were issued to local companies on Thursday, the first since VROMI issued a stop order on October 10.
“We are busy issuing salvage permits now but our concern is that everyone has to be compliant with the laws which are very clear,” he said. “We can’t have a wild-west situation with people working without liability insurance. We are trying to do it the right way. All the paperwork has to be in order.”
Two local salvage companies have since taken out million dollar liability insurance, one of the requirements. Buncamper added no salvage permits have been issued to foreign companies.
A crew of six will be working on the EME barge, including two divers and two crane operators. The barge has liability insurance. Asked whether the crew needed work permits, Peterson said there had been no specific request to apply for work permits.
“They are contracted to work under the auspices of our company,” he said. “If there had been a request we would have filed for them.”
Peterson denied that Marine Management and Consulting (MMC) the company that manages Yacht Club Port de Plaisance attempted to monopolise the salvage market without sharing the work as suggested by some in the marine industry.
“That sentiment came when we saw the magnitude of the damage. We hired a professional company that was able to do the right work. There is more work out there than the local companies can handle. They (salvage companies) would come on site without the right liability insurance and without approval from us to come on our property.
“That’s why we said no, you guys can’t touch it yet. We just wanted to make sure they had their stuff in order. If the insurance company hires you to do the job and you provide the right liability insurance, equipment and approval, feel free to go ahead. There’s so much work for everybody. We never said we would take all the jobs in the Lagoon. Our focus was first to tackle Port de Plaisance in order to open for the season.”