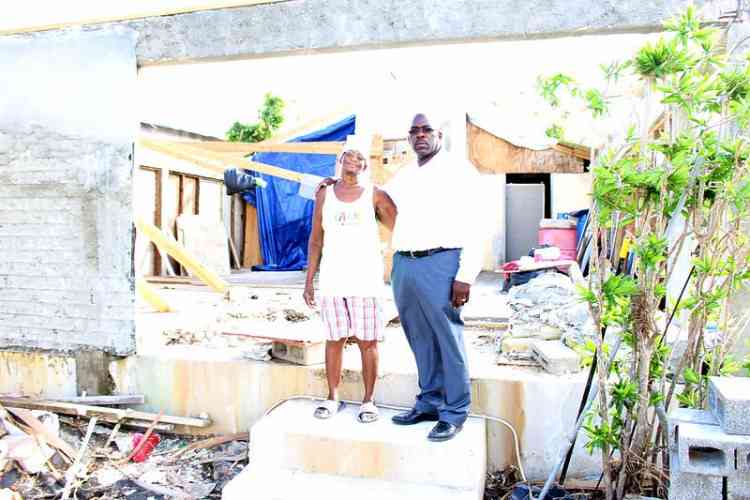 Member of Parliament Rodolphe Samuel standing with a senior citizen who lost her roof as a result of the passing of Hurricane Irma on September 6. Samuel said the senior citizen in Middle Region is just one of many seniors who lost their roofs and need Government’s assistance immediately. (Andrew Dick photo)

PHILIPSBURG–Member of Parliament (MP) Rodolphe Samuel calls on his Government to start an immediate roof repair programme for senior citizens of St. Maarten who have suffered severe damage due to the passing of monster Hurricane Irma on September 6.

“It is raining almost every day and seniors like the one I am by today [Thursday – Ed.] are victims,” said Samuel who is a member of the National Alliance (NA).

“I called this press conference to call on the Government to do something for seniors like Miss Luna who has been living Middle Region for part of her life and cannot continue to live this way. Her roof was lost. We hear that the Government is spending three million on this and finding money to do other things, but I am not hearing Government fixing any roofs.

“I am upset about this, it is about time. Where do these people have to go? You are telling these people to fill in a form, but there is no real help. I need the seniors to get help. I am not hearing anything about immediate assistance for seniors. They need help and they need it now, at least before Christmas,” stated an emotional Samuel at the home of the senior citizen who worked for the White and Yellow Cross for more than 20 years.

When asked by the media why he is publicly requesting help from the current Government he supports, he said he had tried many times to speak quietly to his Government, but no help came.

“I cannot continue being quiet. People are asking me what am I doing about this situation and I cannot continue to be silent. It is time to speak out and let Government know that enough is enough,” said the MP.

“I am a politician; I cannot do anything about that. This has nothing to do with politics. This lady here is a senior citizen and she needs her situation regulated. I am not only speaking about her, but I want government to start fixing the roofs of our seniors. We need to do something for our people.”

The senior said she uses the tarpaulin to cover when it rains, but she urges Government to assist with a tent or help to fix her roof. The hurricane took away her roof two months ago and she has been living in the home in the meantime.

Samuel said he will continue to speak out regardless of the Government in office. He wants a solution before Christmas 2017.