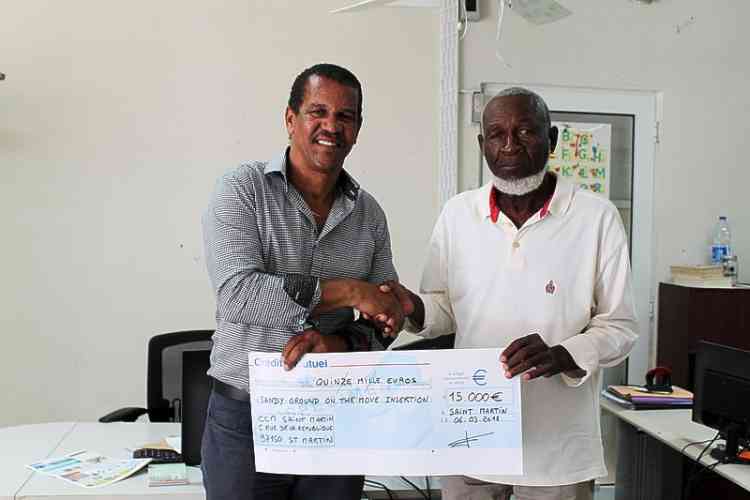 MARIGOT–Association Sandy Ground on the Move Insertion received a donation of 15,000 euros from Crédit Mutuel St. Martin on Tuesday to assist the association with its operations and objectives in an increasingly difficult period for the district post-Hurricane Irma.

“It’s a great honour for us to be able to help build a better future,” said Charneau. “It’s in the DNA of the group to make things better and to work with all associations with whom we have always been close. We also assist in education projects in France and Europe.”

Gumbs added: “We do focus on the youth and sponsor projects concerning education or sports every year. We don’t sponsor mechanical sports.”

Charneau explained that while Crédit Mutuel facilitated the donation, it came from an association created by Crédit Mutuel in Strasbourg to solicit donations for reconstruction in the French Antilles.

“An appeal went out for donations over the Internet, a bit like crowdfunding,” he explained. “One could donate between two and 15 euros. A total of 200,000 euros was raised.”

“Words cannot express how much we appreciate this gesture,” Richardson said. “The district will sleep a lot better from now on. We will use the money in the best way we can. The tasks that the association takes on are much bigger than the association itself. We need the help of everyone.”

Richardson told the bank officials that the district’s associations focus on helping the youth, noting the difficulties many English-, Spanish- or Creole-speakers in the district have when it comes to mastering the French language. Among its projects, the association helps young people coming out of prison to integrate back into society, offers short employment contracts, helps schoolchildren with homework and cares for the elderly.

He said he is assisted by the very capable director of Sandy Ground on the Move Insertion, Marjorie Antoine, who helps to turn his vision and dreams into reality.

Richardson said the association’s current clean-up project is very important to improve the image of the district, particularly in a tourism-driven economy.