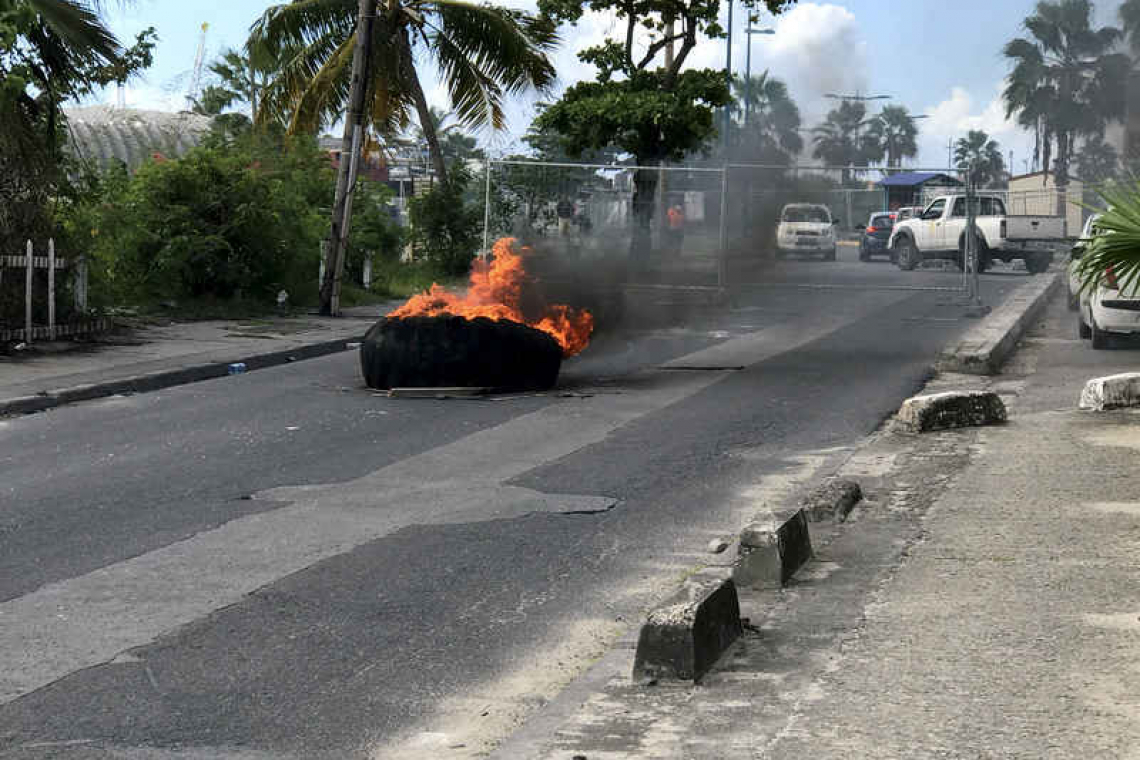 Burning tyres are seen on the road outside Le Pirate in Sandy Ground Thursday morning as barricades in the distance partially close the road leading to the Sandy Ground Bridge. (Robert Luckock photo)

MARIGOT—Violence continued for the fourth straight day as the Gendarmerie attempts to quell the rioting in Sandy Ground and Baie Nettle on Thursday.

From early morning Gendarmes fired tear gas to disperse rioters as they attempted to remove wrecked cars and unblock the roads to free up circulation. The situation has been particularly tense in Sandy Ground and Baie Nettle, near Hommage Hotel. Gendarmes are being regularly attacked with flares, Molotov Cocktails, and rocks.

On the Marigot side of the bridge all the way to Le Pirate the road is strewn with debris, burnt out vehicles and fence-type barricades that are partially open. Cars could be seen weaving through in between the road blocks. Full garbage bins have been deliberately overturned in parts of Marigot or set on fire.

A young Dutch tourist couple staying at the Anse de Sables Apartments was seen walking through the roadblocks on their way to a scuba diving appointment. They seemed unphased by the social rest.

“We’re used to it. It’s far worse in Holland,” the couple said. “We also saw paintballs being fired at Gendarmes this morning.”

At one point in the morning, video showed Préfet Serge Gouteyron accompanied by two of his cabinet members attempting to calm down an angry crowd. Collective member Cédric André was seen in a heated discussion with the préfet, however the noise of the crowd drowned out what was said.

A press release from the collective of collectives issued later in the morning blamed the préfet for cancelling a meeting with the collectives on Wednesday, December 1, which had been scheduled for a week.

“What does the préfet really want?” The collectives questioned. “This recurrent lack of respect for the préfet’s word no longer shocks us because it has become a habit. However, these actions lead us to question the true intentions of the State representative in St. Martin.

“Indeed, the objective of the meeting, which was arbitrarily cancelled, was to continue the discussions already started a fortnight ago, in order to find solutions together to improve the living conditions of the inhabitants, which have been severely degraded since the passage of Hurricane Irma.”

The release added: “No one can doubt at this time the will of the collective to sit around the negotiating table and defend the legitimate demands of the population.  We believe that it is time to have a frank discussion/negotiation on all the major issues that would allow us to better understand the situation in St Martin and above all to find concrete answers to the difficulties of the inhabitants.

“We are in the 21st century and mentalities and institutions must evolve for the benefit of the greatest number. Unfortunately, in order to discuss, we need credible partners who are motivated by the will to defend the general interest and more particularly that of the most disadvantaged.

“Thus, the collective has taken note of the arbitrary decision and is patiently waiting for the goodwill of the préfet to show himself again. In the meantime, suffering is gaining ground, particularly in the working-class neighbourhoods, and anger is growing. He who sows the wind reaps the storm, “the release concluded.