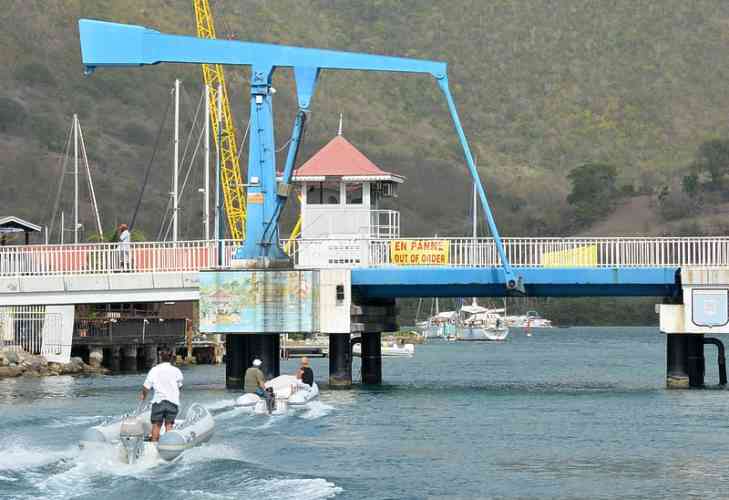 MARIGOT–The drawbridge part of the Sandy Ground Bridge is due to be replaced at an estimated cost of 1.3 million euros, with work expected to start in June and last for seven months, according to the Collectivité’s latest newsletter. Construction companies were solicited to bid on the project in March.

Recurring problems over the last few years with the Sandy Ground Bridge were exacerbated by Hurricane Irma and prompted the Collectivité to think seriously about a lasting solution. The bridge is an important navigational point for maritime traffic into and out of the Simpson Bay lagoon. It was closed again in December causing major problems for those who use it.

After replacing a cylinder at a cost of 22,000 euros it was able to go back to usual opening and closing hours as of March 7. The bridge, however, has suffered corrosion which has taken a toll on the hydraulic parts. As the harbour office also has to be rebuilt, the Collectivité has looked at doing more substantial work in 2019.

Three options are being examined. The first consists of restoring the bridge with a complete cleaning and consolidation of the structure. This would be the least expensive option, but also the most restricting for boaters. In order to do this, the entire bridge deck would have to be put in a “cocoon,” which would prohibit all maritime traffic.

The second option under consideration is to take the movable bridge span to a workshop where it could be treated and repaired. This solution would require something provisional to link the two sides of the road, but would also restrict all navigation. Finally, the third option is the most expensive but the least restrictive: replacing the moveable bridge span with a new one.

The latter option will render the bridge ready for the start of the next tourist season. As maritime traffic will be impacted, the Collectivité is working with the southern part of the island to make sure the other two bridges, Simpson Bay and Causeway, will be operational during the work period.