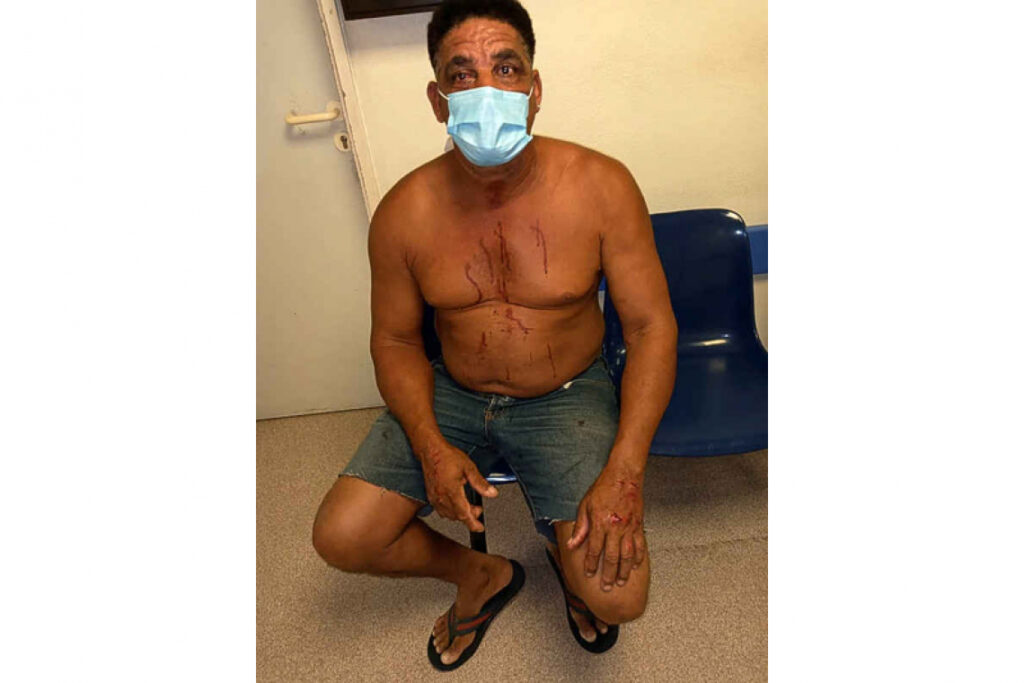 Franklin Carty waiting to be treated in hospital.

MARIGOT–A Sandy Ground man has said he was tasered three times by Gendarmes during an incident that took place in Sandy Ground on January 21, and accuses Gendarmes of using excessive force.

Franklin Carty (56) was involved in a dispute with his neighbour at Impasse Tile Fish over property issues. Carty’s building and the neighbour’s building are next to each other. An argument between the two apparently got out of hand and the neighbour called the Gendarmes on Carty, who said he was cutting grass in his yard with a machete at the time.

When three Gendarmes arrived, things took a turn for the worse. Another neighbour got Carty to drop his machete, but when his back was turned one of the Gendarmes discharged a Taser gun into his back and neck and when he tried to get up, fired another shot. In addition to the barbed darts in his back, Carty said he sustained injuries to his jaw and hands, and lost a tooth.

A friend took him to hospital where the darts were removed. Gendarmes then arrived at the hospital and he was taken into custody in the Concordia Gendarmerie. He was asked to sign papers written in French, but only speaks and understands English.

Four days later he received a summons to attend court on June 10.  He is charged with offences including violently resisting arrest, carrying a category D weapon, and damaging his neighbour’s fence.

“It’s not normal to be brutalising St. Martin people like this, and this wouldn’t happen to Europeans,” said District Representative Cédrick André, who himself has had numerous confrontations with Gendarmes. “Gendarmes need to understand the culture and respect us. Not all Gendarmes are bad, there are good ones too. All St. Martiners have machetes, it’s part of our culture.”

The side of the Gendarmerie could not be obtained on this incident and whether use of the Taser gun was justified. Commandant Stéphan Basso said Tuesday he had no comment to make “in a foreign newspaper concerning an incident that happened on the French side.”

Barbed darts from a Taser gun are seen in Franklin Carty’s back.