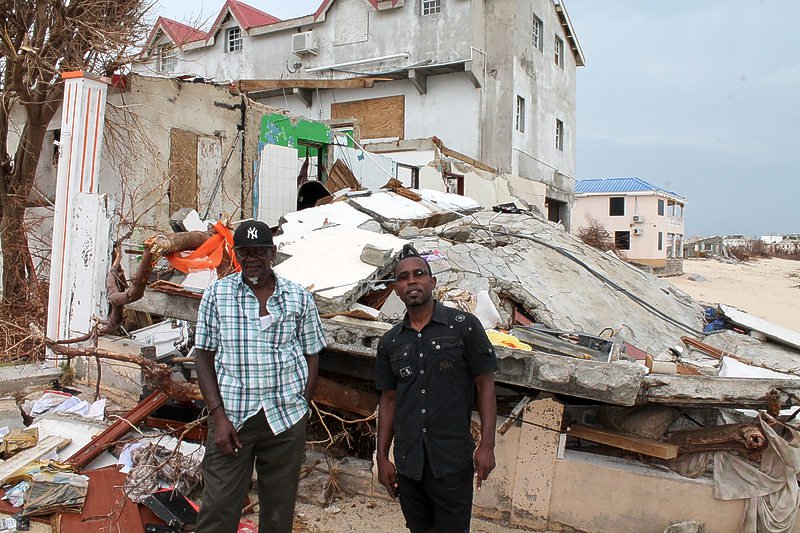 MARIGOT—Joseph Richardson stands on a sandy track on Impasse Dauphin in Sandy Ground, about fifty yards away from where his house once stood on the beach. Stumps of trees and bushes either side of him, once green, have been stripped and burnt brown by the salt air.

At a rough guess Richardson is about six foot tall. He puts the side of his hand across his chest. “The water was this high, and it just swept my wife away, across the main road on to the other side where her body was found,” he says forlornly, sipping from a bottle of water.

Sheila Richardson (65), his wife, drowned during the early morning hours when the power of Hurricane Irma was at its most intense, at about 5:30am. Although no one believes the official death toll reported by the Collectivité, she is part of the list of 11 deaths reported so far.

Richardson’s house was situated on top of another house, both in one building, right on the beach. The storm surge and Irma’s constant pounding waves caused the lower house to disintegrate which in turn caused the house above where Richardson and his wife were riding out the storm, to collapse downwards. He estimated the sea was about eight feet higher than normal.

“We had always been accustomed to staying in the house, since 1973, and survived the last five hurricanes,” Richardson stated. “We had even built a protective wall in front of the house. But this hurricane I have never experienced anything like it before. We didn’t know it was going to be that bad.

“The house collapsed, leaning sharply to one side which meant we had no gravity and couldn’t keep our balance to stay upright. My wife slid down into the water and somehow she got her foot stuck on something. I was holding on to her and pulling and pulling with all my strength. Big waves were coming in all the time. I could hold my breath but for a woman it is much harder and she drowned right there. I did everything I could to save her. I managed to survive by breaking a window on the next door house and got in there.”

Heartbroken by the loss of his wife of 49 years, Richardson said Sheila was a “kind, very nice lady.” She worked at the Aline Hanson School in Sandy Ground in administration. “She helped out everywhere.”

Richardson and his son Jean-Claude moved in to a relative’s house in Friar’s Bay after Irma passed. The relatives happened to be away.

Richardson plans to rebuild the house in time. At this moment he doesn’t know what sort of help he is going to get from the Collectivite.

“I leave that part to my son. I lost all my clothes and I found some of them that I am wearing now in the rubble,” he added.