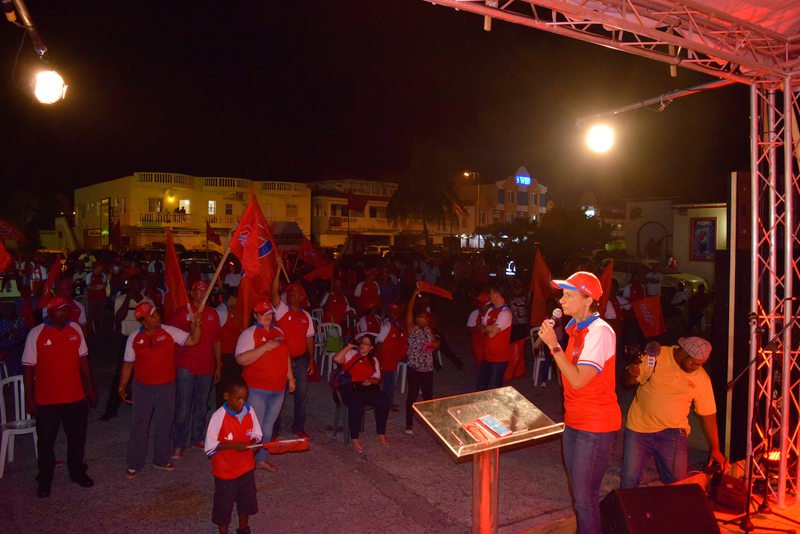 SIMPSON BAY–Too many “recycled promises” dating to 2014 and before are being fed to voters by political parties that have been in Government, while the Democratic Party (DP) has a proven track record, the red party leader Member of Parliament Sarah Wescot-Williams told supporters at the party’s final rally on Friday night in Simpson Bay.

Some of those recycled promises pertain to solving the country’s solid waste management issues and boosting the economy. Some parties “all have the answers today,” but don’t have any when in Government,” said the party leader.

Looking back, Wescot-Williams said DP has been the only consistent party, and is able to claim significant accomplishments for the country first with two seats in Parliament from 2010-2014, and then with just one since 2014 and a lone minister. She asked supporters to imagine what the party can achieve with more seats in Parliament.

DP is one of nine parties on the ballot for Monday’s Parliamentary Elections, the second such polling in two years. Snap elections were called due to the constant shift in majority in Parliament. Wescot-Williams heads the slate of 17 other candidates that includes incumbent Public Health and Labour Minister Emil Lee.

Building on her party’s slogan “dedicated to the people,” Wescot-Williams outlined a number of accomplishments she and Lee have booked since 2014.

DP intends to continue championing labour reform, cooperation with the French side, and ensure medical coverage for all, as well as push to make the country a technological and finance centre, and to make English the country’s “first official language” and not second to Dutch.

The completion of the new hospital as started by Lee and the finalisation of the laws for timeshare owners’ protection will be tackled by DP in the next governing period.

The Constitution prescribes that should the population surpass 60,000 people, the number of seats in Parliament will increase from 15 to 17. Wescot-Williams said the increase is not necessary, because the 15 MPs in the existing set up must work hard for the people.

She told supporters they have “to elect capable persons” to Parliament, so those MPs can appoint capable people to the Council of Ministers. MPs should work for their money by making Parliament “work for you.”

“DP will build this nation. If we can’t build St. Maarten, who will build it for us? … If the people don’t rally to save St. Maarten from the things that are coming to us, we will all be responsible for its [country’s –Ed.] demise, said Wescot-Williams.

The 17 other DP candidates presented Wescot-Williams with long-stemmed roses as a token of their appreciation for her strength and fastidiousness in caring for the country.

All party candidates expounded on why DP was the right choice to put their confidence in come Election Day. Some candidates also shared their plans when elected.