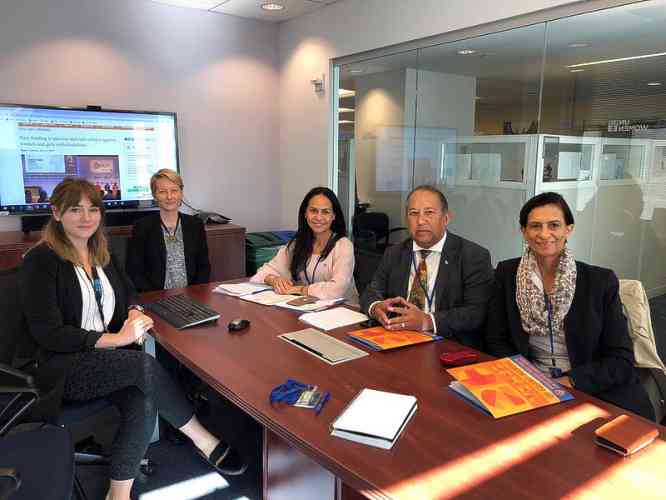 PHILIPSBURG–Parliament Chairwoman Sarah Wescot-Williams recently returned home from New York where she participated in the Political-Civil Society Delegation to the 73rd United Nations General Assembly (UNGA). This was the second consecutive year St. Maarten was invited to be part of the Dutch Kingdom delegation, comprising members of the Dutch Parliament’s First and Second Chambers and civil society representatives.

Gender, peace and security were some topics presented in the meetings and as themes of presentations tailored for the visiting delegation.

The UN Security Council gave several “hot regions” special attention. Other programmes that look at the fallout from conflicts all over the world were approached from the contexts of migration and human smuggling, sexual violence, human rights, extremism and prosecution. The International Court of Justice was also a topic of discussion.

In her report to Parliament, Wescot-Williams outlined that St. Maarten, Aruba and Curaçao had spoken with the Dutch Permanent Mission to the UN about the Dutch Caribbean countries’ drive for stronger representation in international affairs.

The diversity of the kingdom partners, which works against the Caribbean countries when it comes to tapping into funding available for developing countries, was also on the agenda.

The three Dutch Caribbean countries’ representatives also had separate talks with the UN Women agency and UN Water representatives. The UNDP’s reform agenda was also expounded on in meetings.

In her report, Wescot-Williams said St. Maarten’s parliament should keenly monitor the kingdom government’s compliance with the joint parliamentary instruction regarding the dispute regulation and that the agreed-on periodic consultation – outside of Inter-Parliamentary Kingdom Consultation IPKO – with Aruba and Curaçao takes place urgently.

More effort must be put into ensuring more equitable representation in organisations that could benefit the country, she said. Also, the kingdom government should be asked (via the St. Maarten government) “to find ways to put us on the side of the receiving countries when it comes to benefitting from UN funding and programmes, most if not all which are heavily funded by the very Dutch Kingdom itself.”