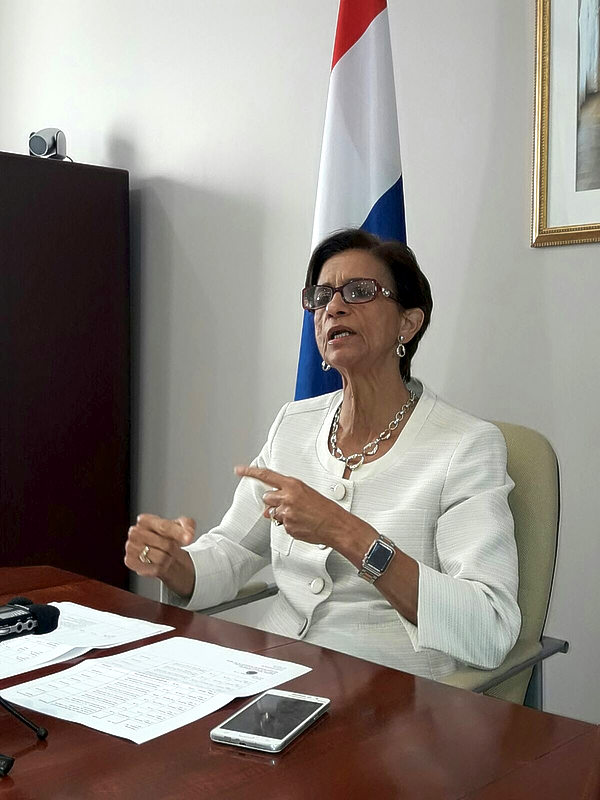 PHILIPSBURG–Chairperson of Parliament Sarah Wescot-Williams said on Monday that St. Maarten should seriously re-examine its relationship within the Dutch Kingdom.

She conveyed her sentiments to her coalition partners recently. Her position comes in the wake of the Dutch Council of Ministers’ decision to appoint recently-resigned Dutch Tax Office Director-General and former Commander of the Royal Dutch Marechaussees Hans Leijtens as quartermaster for St. Maarten’s Integrity Chamber.

Prime Minister William Marlin had said earlier that the appointment had not been communicated to St. Maarten and Wescot-Williams said Monday that it had been done in total disregard of St. Maarten’s autonomy within the Kingdom.

“We need to sit and look at where we are, as far as the relationship with St. Maarten in the Dutch Kingdom is concerned, and, with the people, decide if this is conducive to our further development,” Wescot-Williams told reporters at a press conference at the Parliament Building.

“It’s not to jump on a high horse, but we need to sit as St. Maarten and reflect, because today it’s the quartermaster and dispute regulation [and tomorrow it will be another issue – Ed.]. If you see how the dispute regulation is handled … I don’t see it coming in the near future. It will be a back and forth. If I look at appointment of the quartermaster – it’s the same thing there.

“The St. Maarten Government and Parliament and the people of St. Maarten have too many critical issues that we need to sit and analyse and decide where we are going with them. Having a back-and-forth with the Dutch government – I don’t think that we have the time and the energy to engage in this time after time again. We need to evaluate [the situation – Ed.] under the current setup.”

Given the current concerns, Wescot-Williams has requested that a meeting of Parliament be convened to debate the controversial appointment this Thursday, January 26. Prime Minister Marlin has been invited to Parliament for the discussion on the matter (see related story).

Dutch Minister of Home Affairs and Kingdom Relations Ronald Plasterk said last Friday that he is keeping St. Maarten to the protocol signed in May 2015 to establish an Integrity Chamber for the island, as it is in the best interest of the people of St. Maarten. Plasterk was not deterred by Marlin’s remarks that the local Government had not been officially informed of the Dutch Council of Ministers’ decision.

Touching on the matter of the dispute regulation, Wescot-Williams said such a body is needed to discuss issues such as the appointment of the quartermaster. She said currently there is nowhere in the Kingdom to which partners can take their disputes about Kingdom matters.

“If we don’t agree with something, where do we go with that dispute? There are issues playing that warrant the intervention of a dispute regulation, such as the appointment of the quartermaster,” she said. Parliament, she said, needs to take a stand on the issue of the quartermaster.

She said also that while the appointment of a quartermaster had been part of an agreement made with the Dutch Government, taking into account where St. Maarten is today with a change of Government, for Plasterk to “out of the clear blue sky” announce “in the media” the appointment of a quartermaster, “media reports say that person will take up appointment today [Monday – Ed.] – the question would be, is this the way that we operate with each other?”

She also questioned on the basis of what law the quartermaster had been appointed to carry out his task, given that there is no law on the Integrity Chamber.

She said also that all laws passed by Parliament have to be submitted to the Ombudsman and given a period of six weeks to determine whether the content of the law is in conflict with the Constitution.

“If I look at the way the appointment and announcement was made [of the quartermaster – Ed.], it was with total disregard for communication with the local government. And … the dispute regulation that was submitted by Plasterk … has gone in total neglect of what parliaments have decided,” she said.

She said Plasterk had drafted a law for the dispute regulation with the premise that the Council of State would act as the dispute body. “This is the law that the Kingdom Government has decided to put into procedure,” she said, adding that this is “in total disregard for the agreements made by parliaments as far as a dispute regulation is concerned.”

Wescot-Williams said she had informed her coalition partners that St. Maarten should “complete our story” on the Integrity Chamber law in “one way or another.”

“The confrontation will come one way or another,” she said. “… The bucket will continue going down the well until it breaks. How often does the Dutch government think it will get away with these kinds of things without there being any repercussions?”

Minister of Home Affairs and Kingdom Relations Ronald Plasterk told the media after the meeting that the law proposal would now go to the Council of State for advice, after which it will go to the Second Chamber of the Dutch Parliament for handling.