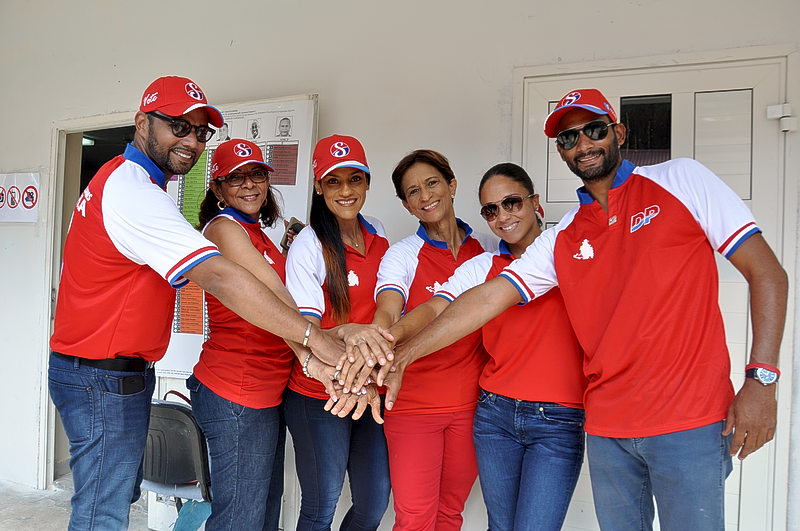 PHILIPSBURG–Democratic Party (DP) leader Member of Parliament (MP) Sarah Wescot-Williams has wished National Alliance (NA) and United People’s (UP) party “much wisdom in their negotiations” to form a new Government for the country following the September 26 Parliamentary election.

“With the rest of St. Maarten, we await the outcome of these negotiations and truly hope that the decisions taken will be in the interest of the entire country and all its people,” she said in a press statement on Tuesday.
She is “thankful” her red party has maintained its two seats in Parliament. The same number of seats was earned in the 2014 election, but outgoing MP Cornelius de Weever went independent shortly after that election. He contested the September 26, 2016, snap election with UP, but is not among those re-elected to Parliament.
Wescot-Williams is re-elected to Parliament where she has been a member since 2014. In that year, she earned 697 votes. This year, her count stands at 444.
“I am disappointed in my personal performance at the polls, but thankful that we maintained our 2 seats. … I will continue to represent the people of St. Maarten in Parliament. On the short time, I will seek to complete the things I started in Parliament and focus on the social issues our community is facing,” she.
Joining her in Parliament will be new MP and current Public Health Minister Emil Lee. He said in separate press statement: “While I definitely consider my winning a seat in Parliament to be a victory, I believe that the real victory is for the people of St Maarten.”
Lee said he was delighted to continue to work on behalf of the people from a seat in Parliament. “I am looking forward to bringing my trademark style of professionalism, openness and transparency to the floor of Parliament,” he said.
In preparation for the incoming Government, Lee said the Ministry of Public Health, Social Development and Labour VSA would already begin preparations for “a smooth transition and continuity” with the new Minister. “A lot of progress has been made in the past 10 months and it is critical for the country that all progress that has been made on behalf of the people is secured,” he said.
Lee earned 667 votes, up from 285 in 2014, the first time he ran for office. He earned more votes than his party leader, similar to what happened in NA with deputy leader Education Minister Silveria Jacobs receiving more votes than leader Prime Minister William Marlin.
DP will hold a debriefing and analyse the results of the campaign in the coming days.
To DP candidates, Wescot-Williams said, “Have no regrets. You offered honest change and fought a valiant fight in murky waters. … We/you will go at it again, when the need arises for honest and capable politicians. Until then, walk with your heads high.”
She thanked voters for placing their trust in DP.