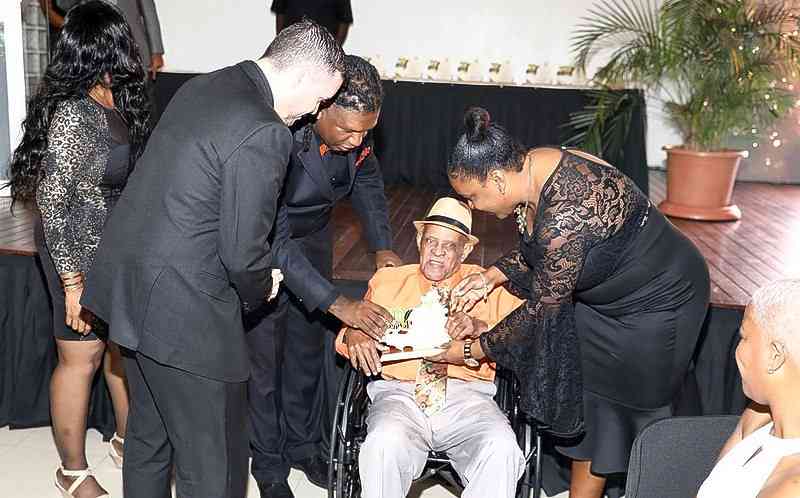 Long-time booth-holder Cleveland Hazel is presented with his recognition award by SCDF President Alston Lourens, Minister Stuart Johnson and Cleveland’s daughter Valda Hazel. Cleveland Hazel turned over his booth operation in Carnival Village to his daughters some years ago. They still run it to this day.

PHILIPSBURG–St. Maarten Carnival Development Foundation (SCDF) paid tribute on Saturday to eighteen persons and entities who have contributed significantly over the past fifty years to the development of Carnival in St. Maarten.

SCDF honours about five persons every year as part of the Carnival festivities, but chose to expand that number for Carnival’s 50th anniversary.

Minister of Tourism and Economic Affairs Stuart Johnson, who is a former SCDF President, was present during the event.

“We wanted to take the opportunity for Carnival 50 to honour these persons and companies and express our gratitude for everything they have done for Carnival over the years,” SCDF President Alston Lourens said.

All of the honourees spoke after receiving their recognition and explained how they were and still are involved in Carnival. They thanked SCDF for the recognition and wished it nothing but success moving forward.

“SCDF does not stage Carnival on its own. Yes, we are responsible for the overall staging of the festival, but it could not be done without the contributions of many people across many sectors of Carnival. Carnival will only grow if we do it together,” Lourens said.

In his address to attendees, Johnson said, “50 years ago, some of the island’s pioneers came together with a plan to host a cultural event with participation from talented individuals throughout the island. It was an event that drew the attention of citizens that even then included local and neighbouring island residents wanting to let loose and have fun.

“In honour of their contribution, I want to ask you to do two things tonight. First, let us pay respect to those contributors who have passed in a moment of silence. As we celebrate our achievement of 50 years of Carnival, it is fitting that we remember those who in extraordinary ways contributed to getting us to this point.

“Being able to play with the unwavering support of my late beloved mother Linda Johnson, either as an individual in the children’s parade or in the troupes she organised at Sister Borgia Elementary School with the support of Alberto Brooks. Alberto Brooks in my book is truly the best in costume designer. I am forever grateful for his support always,” said Johnson.