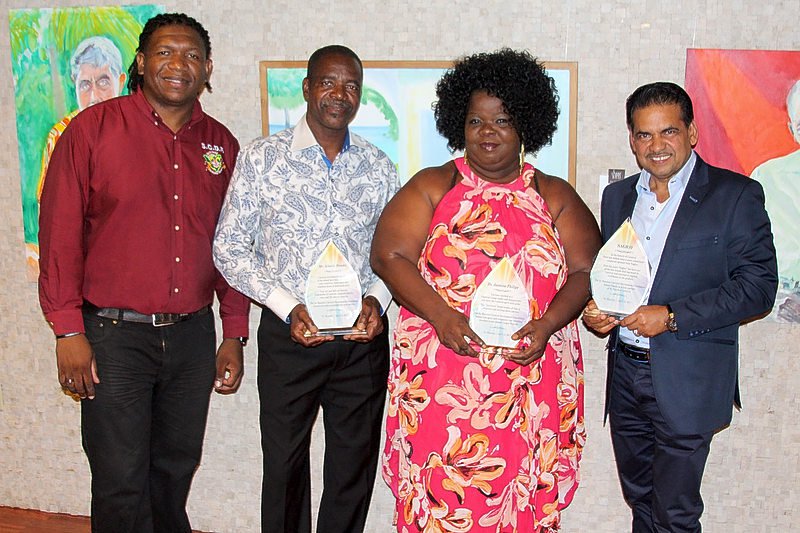 SCDF President Alston Lourens said the ceremony had to be organised outside Carnival to really show appreciation to the stakeholders who were honoured. This is the second year SCDF has hosted a gathering outside of Carnival.

SCDF selects three individuals/companies annually to honour for their overall and sustained contributions to Carnival. With Carnival stakeholders spread far and wide, SCDF is never short on possible persons to honour.

SCDF Treasurer Michael Granger served as the Master of Ceremonies along with former president Erno Labega. Granger said the three honourees chosen this year are mainstays in Carnival and are firmly entrenched as part of the overall Carnival brand.

In troupe leader Jasmine Philips, SCDF is honouring not just a troupe leader, but someone whose passion is Carnival and who sacrifices personally to ensure that, come what may, she is part of the festivities.

“Jasmine said more than once that she had it with Carnival, this would be her last year, but guess what – the next year SCDF can count on her Survivors troupe to come out may it be for the Children’s Parade or the Grand Parade. The brand has been imprinted into the brand of Carnival and many troupe leader aspire to be just like Jasmine,” said Granger before Philips was presented with her honorary crystal.

Labega said Philips had been through financial troubles and still managed to come out with a group every year. “I remember when SCDF took a while to pay the prize money to Survivors for winning the Children’s Parade and every week she would call and ask if we have her money and I would say, ‘No, not yet, we are waiting on sponsors.’ She politely said, ‘Okay, no problem, I will wait,’ and the week finishes and she calls again,” said Labega.

Her Survivors troupes, both children and adults, participate in the parades every year without missing a step. She has won several troupe and individual costume awards over the years and, according to SCDF, seems to be getting better and more creative with her troupes every year. Besides Survivors, Philips has also made her name as a Queen Pageant chaperone, taking responsibility for at least two contestants annually, sometimes more.

The second honouree is costume builder Alberto Brooks, whose costumes have won countless awards and are featured in everything from Queen Pageants to individual road pieces. Brooks, himself a parade reveller once, is also the architect behind the King Momo statue that is burnt at the end of Carnival festivities. He also makes all of the crowns worn by Junior and Senior Calypso and Road March winners.

Granger said Brooks continues to be dedicated to his craft and he too personally gives back to Carnival by helping others when sponsorship is scarce and takes great pride in seeing his costumes on display.

Labega recalled that when Brooks stopped revelling in the parades, he devoted all of his time to assisting participants in the Dutch- and French-side Carnival festivities. His artwork goes a lot deeper than just the large costumes. He makes all sorts of festive hats and outfits for the regular onlooker and constructs floats when requested. He has placed his stamp on Carnival for years and “we think it is beyond time he is recognised for it.”

“I dedicated this award to my family, my two sons in France and my wife, grandchild and son here. This is for you. My mentor in Trinidad has been making costumes for almost 50 years and he was honoured two months after his death. Thank you to SCDF for giving me my flowers while I am still here,” said Brooks.

Granger honoured the last honouree by saying SCDF is heavily dependent on corporate sponsorship. With Government subsidising 25 per cent of SCDF’s overall budget, the remaining 75 per cent must be funded entirely by contributions from the private sector. NAGICO Insurances continues to be a major sponsor of Carnival annually and for this reason NAGICO Group’s Chairman Imran McSood Amjad represented the company at Wednesday’s ceremony.

Labega said, “Years ago I called the NAGICO Chairman and asked to see him. He agreed and I went to his office and asked for a large donation to save our Calypso Show at the time. He asked, “What does the company get out of making a contribution?” I told him that we will call it the NAGICO Insurances Calypso Show and the rest is history. Every year we can count on the support of the company and for that I say thank you,” said Labega.

Granger also explained that NAGICO had been chosen for its commitment to the art form of calypso as well as contributions “we typical do not see. Meaning, while the company sustains calypso, it also gives to other parts of Carnival as a good and responsible corporate citizen,” Granger said.

McSood said it was an honour to share this award with stakeholders such as Brooks and Philips because of the commitment they both bring to Carnival.

“I believe that without culture a country has no identity and I strongly believe that a country without culture is a lost country. This award is not just for me. NAGICO consists of many stakeholders and they all play a role in the contribution. My family also play a major role as they support Carnival through their companies. SCDF can count on my continued support,” said McSood.