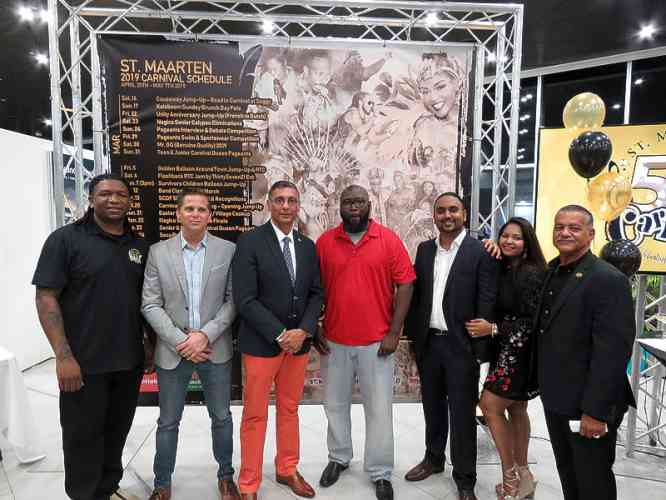 COLE BAY–“Celebrating 50 years of life” is the slogan for the fiftieth annual Carnival celebration from April 20 to May 17, 2019. Organisers and partners came together for the official launch at the MotorWorld showroom in Cole Bay on Friday evening showcasing the new logo for Carnival next year, the official car for Carnival 50, the Hyundai Tucson, and the anticipated calendar of events.

The 33 days of “mas” is the longest St. Maarten Carnival Development Foundation (SCDF) has ever hosted, making Carnival 50 the longest Carnival to be held in St. Maarten. The theme was chosen to complement Carnival’s permanent branding slogan “Come, Experience Life.” SCDF President Alston Lourens explained that the “Life” part of the slogan refers to who and what comes together in any given Carnival season.

“Carnival brings togetherness of all people from all cultures, it brings happiness, culture, music, food, pageantry, revelry – all of this is life. Carnival is life. We have been fortunate enough to have had the opportunity to celebrate 50 years of life and we will make history with this one,” Lourens said proudly.

Present at the event were major corporate sponsors of SCDF, government officials including Minister of Finance Perry Geerlings, SCDF volunteers and other Carnival stakeholders.
Both the logo and the schedule were designed by Cleon Frederick, who was also present at the event.

“Our Carnival, which we have celebrated for five decades, is officially the longest festival in the region, that feat cemented by the great vision of government in the past to build the perhaps world’s first purposely-built carnival venue, called the Festival Village, which we affectionately call the Carnival Village. It is our home, headquarters, the place memories are made and hearts are broken, for most of us our temporary home for three weeks every April, our Mecca.

“Now, looking into the future, we will have to call on government once again to join us in a vision for the future, where the relationship between the SCDF and village is a mutually beneficial one allowing us all as a country to efficiently manage our return on investment,” Lourens said.

“Also, equally to announce some of the projects being done by the schools, foundations and other organisations, including government, which will add more magic to the celebrations. Great projects such as a costume building workshop for the kids, a cookbook of the 50 greatest dishes and an album of the 50 greatest songs of St. Maarten as well.
“The schools will be building floats and documentaries will be made about just every aspect of Carnival over the last 50 years, as we all (as a country) contribute our Carnival memories from the beginning to where we are now.”

The schedule
The schedule is adorned with pictures of Carnival past and present. Carnival icons such as Mighty Cat, Kaiso Brat, Diane Velasquez, Calypso Barbara, Jocelyn Arndell with Tanny and the Boys, and Roland “Paben” Bryson are all included. Long-time reveller police spokesman Chief Inspector Ricardo Henson is also on the schedule along with the late Vance James Jr.
The pre-Carnival events kick off on March 16 with the annual Causeway Jump-Up. It is the first of 13 pre-Carnival events to be held in March and April before Carnival opens.

The schedule is packed with everything Carnival-lovers have come to look forward to in Carnival, including the return of the Unity Jump-Up from the French side to the Dutch side, a Golden Balloon Jump-Up, a Daybreak Breakfast fest, all four pageants and a new pageant for gentlemen, the biggest Jouvert in the Caribbean, all three parades, six international concerts and various local events.

Lourens explained that anniversary elements will be included in almost every event.
“Right before we officially open, the SCDF will be hosting our Golden Anniversary Gala where we can give proper recognition to the pioneers of this great festival,” he said. “We are very proud of this schedule and we are confident that residents and visitors alike will love every aspect of it. It has been five decades, half a century, 50 years of great music, 50 years of great food, 50 years of craftsmanship and revelry, and this upcoming April join us and the rest of St. Maarten as we celebrate 50 years of life.”