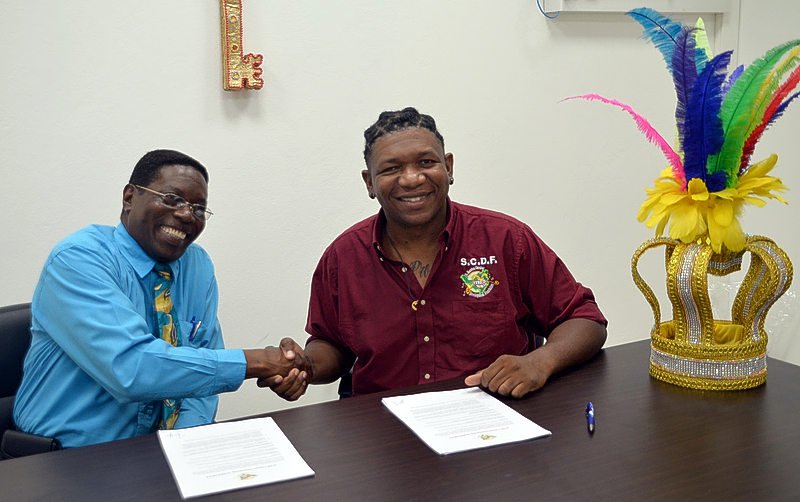 PHILIPSBURG–The St. Maarten Carnival Development Foundation (SCDF) has decided to outsource the organization of the Senior Calypso Competition to a new entity, the Calypso Organizing Committee (COC), chaired by Fernando Clark. With the move, the SCDF continues to build upon one of its core principles – to involve as many stakeholders as possible in the organization and growth of St. Maarten’s Carnival product.

The outsourcing of the Calypso competition follows the foundation’s decision to outsource its pageants to Posh Productions last year, a move that proved extremely successful this past Carnival season. While the SCDF remains ultimately the authority over all of its outsourced events, the organizations have free reign to organize these events the way they see fit. The agreement with COC is for three years.

“Carnival is such a large venture there is no way a small group of volunteers could do it all alone and still achieve the goals we want to. We want to be able to position Carnival on a permanent growth trajectory. This means injecting new ideas, adapting new business models, and giving stakeholders the opportunity to truly contribute to the festival we all love,” President of the SCDF Alston Lourens said.

He added that the discussion with COC took place a few months, but there was always mutual interest in getting this done. “Fernando and his team have great plans for the Calypso competition and we are eager to support them however we can. These are true calypso lovers and they have nothing but the best for Calypso and Calypsonians at heart. We hope the general public and business sector cooperate with them in taking Calypso to new levels of success,” Lourens said.

“To encourage participation we will not only add more prizes for the winners, but we will give the participating calypsonians more chances to perform outside of the competitions and expose their songs. To accomplish this, we will bring back the calypso tents.
“We already have the blessings from the Carnival Committee on the French side to host the first calypso tent during their Carnival celebrations in February 2017, at the Carnival Village in Marigot. Only calypsonians signed up to participate in the 2017 calypso competition will perform in the tents. The second calypso tent will be held in March 2017, at a venue yet to be determined, followed by the NAGICO 2017 calypso eliminations,” Clark explained.

Clark added that some adjustments will be made in the judging system. “The criteria will remain as usual, while judges will be assigned to judge in specific categories. For example, we will have a number of judges judging the participants’ lyrics, other judges judging the music’s melody and so on, covering all the categories in which the calypsonians are judged.”

He said COC is also looking into the possibility of having the Calypso monarch perform at other countries’ calypso shows as a guest artist. Additionally, at the request of the reigning Calypso Monarch Shakiyah, who was present at the signing of the agreement, Calypso workshops will be organized to cover areas such as: judging and how to write a good calypso. As this was already in the plans, COC will strive to accomplish this with the input of the Calypsonians and SCDF.

“NAGICO is the main sponsor of the calypso competitions, eliminations and finals, and we hope that they will come on board with the Calypso tents. Our aim is to enhance the art form, encourage new participants and to develop calypso as a talent that can one day become a bread-winning profession for some,” Clark concluded.
Clark can be contacted at 523-9496.
Source: Daily Herald
SCDF outsources Calypso competition to organization