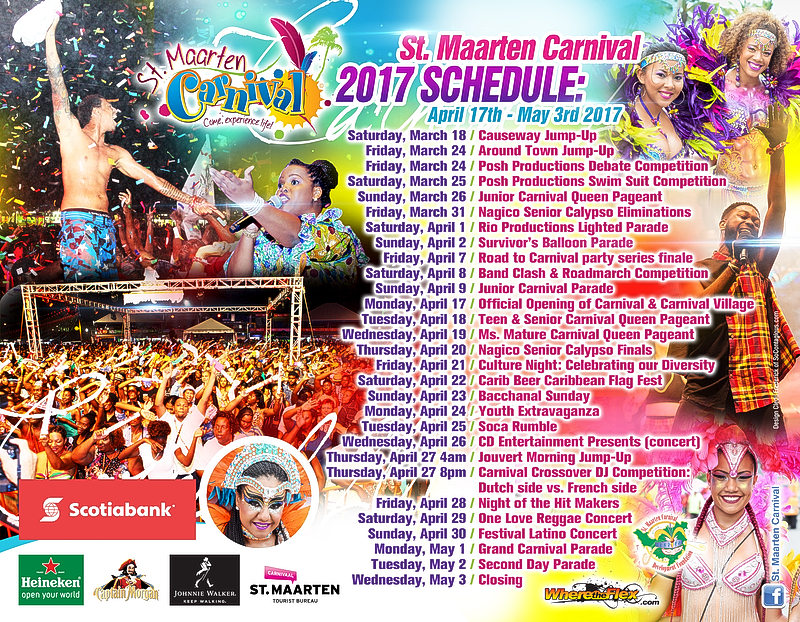 PHILIPSBURG–St. Maarten Carnival Development Foundation (SCDF) released on Thursday the official schedule of events for Carnival 2017, sponsored once again by Scotiabank. With the first Carnival-related event on March 18 and the final one on May 3, St. Maarten’s largest calendar event will span more than a month of what the SCDF likes to call “pure mas.”

With its familiar theme “Come, Experience Life,” St. Maarten Carnival 2017 will feature a full 11 pre-Carnival events before the official start of the season on April 17. The schedule has five jump-ups listed, five parades, six international concerts and 12 locally-themed nights.

After taking up the challenge to host the One Love Reggae concert for Carnival 2016, SCDF will again host the reggae concert and has even added Latin night under its umbrella. What used to be Sabor Latino will now be “Festival Latino” hosted by SCDF. Entertainment group Laugh Out Loud Productions will be organising the annual Youth Extravaganza, adding a primary school segment to the already fun-filled line-up.

Veteran promoter Clarence Debry of CD Entertainment is also back in Carnival with a concert night leading into J’ouvert. The village wet fete known as Bacchanal Sunday is also back and is expected to be even larger than the first edition presented during Carnival this year. So too is Carib Beer’s Caribbean Flag Fest, and Carnival’s flagship concert Night of the Hit Makers will be back for its fifth anniversary edition.

A full complement of pageants is back under the stewardship of Posh Productions. The Junior, Teen, Senior and Mature Queen pageants along with their pre-pageant shows are all listed.

Calypso lovers are definitely not left out, with the NAGICO Calypso Competition on the slate, as well as the Soca Rumble.

Two new local events will be held this year in Carnival Village. The first is a deejay event that will pit Dutch-side deejays vs. French-side deejays. It will be the first time for such an event in the Village.

The second new event is a full-fledged culture night which will celebrate the island’s diversity, according to SCDF. “We are very excited about this night because of the response we have been getting from the various groups that represent the different nationalities on St. Maarten. We will be sharing a lot more information about this event in the coming weeks, but so far with all of the commitments we’ve received it will be a night of culture not to be missed,” SCDF President Alston Lourens said.

In addition to cultural presentations on that night, the popular Village Cookout will also be held, as well as another new event that will feature the specialty drinks available in the Village. “The amount of specialty drinks booth-holders are coming up with every year prompted us to do something a little different that involves these drinks. More information to follow,” Lourens said.

He said that, in general, the schedule had not been easy to put together based on the number of requests for show nights as well as the fact that Easter falls very late in 2017, which is why Carnival opens on Easter Monday. SCDF will continue its standing tradition of respecting the Easter holidays.

“We think Carnival-lovers here and abroad will love this schedule. Once again there is literally something for everyone on this schedule, making Carnival again the most inclusive festival in St. Maarten. We hope to get the cooperation of all Carnival stakeholders to continue the steady growth of St. Maarten’s largest event,” Lourens said.

www.sxm-carnival.com . The schedule was designed by Cleon Frederick of So Contagious Productions with photo contributions from R. Rogers Photography and Robin Pieters.