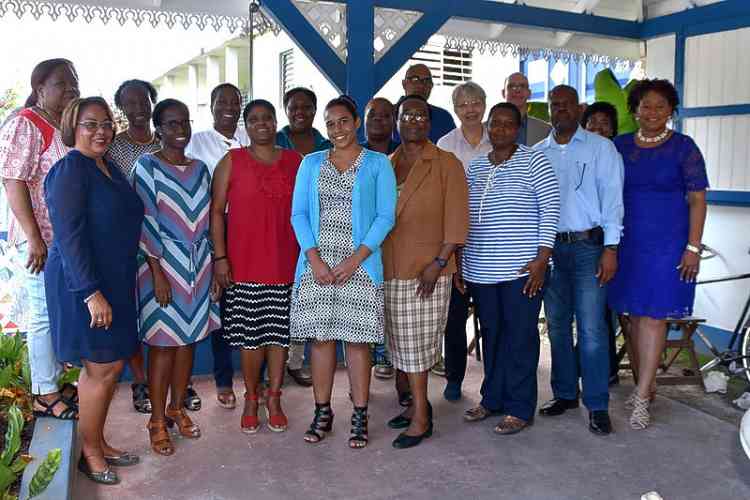 Participants in the conference held in St. Eustatius on labour conditions in education.

SABA/ST. EUSTATIUS–Representatives of school boards, management and staff spoke about the contents of the recently closed Collective Labour Agreement (CLA) and employee participation during a conference held in Bonaire and St. Eustatius, on October 23 and October 25, respectively. The conference highlighted points for improvement, which should in particular lead to more authority of local schools where their own labour conditions are concerned.

In the near future a meeting will be held with the schools on Saba in order to discuss these themes. Education union Simabo participated in the conference held in Bonaire.

Ministers of Education, Culture and Science OCW Ingrid van Engelshoven and Arie Slob want to ensure that educational institutions in the Caribbean Netherlands can arrange their own affairs and, if necessary, receive support of the ministry.

With the schools in Bonaire, Statia and Saba they want to make a decision on how to improve the CLA consultations and the the terms of employment.

The conference, titled: “Employment Conditions Education: In Whose Court is the Ball?” is the first step taken to achieve this. Topics on which the schools want to have more influence include senior policy, working time, professionalization, limiting work pressure and incentives.

During the meetings it became clear that more cooperation is deemed important in order to have influence on the labour conditions.

For example, schools could make it more attractive to become a member of the Participation Council, for example by having teachers carry out Council tasks during working hours. Involvement of teachers, parents and students contributes positively to the functioning of schools, it was stated.

The ball is now in the court of the schools and employees. Supported by the Ministry of OCW, the output of the three meetings will be processed into a plan of action to implement the desired improvements, for both employment conditions and employee participation.

Changes to the Declaration of Conduct | FAXINFO