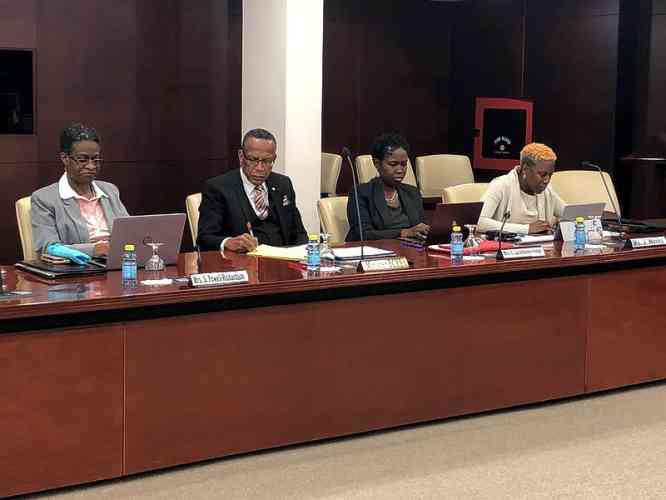 Education Minister Wycliffe Smith (second left) with members of his delegation on Monday.

PHILIPSBURG–Members of (MPs) posed a number of questions and raised a few concerns to Education Minister Wycliffe Smith regarding the effects of the lump sum subsidy on the schools during an urgent plenary public session on Monday.

The urgent meeting comes on the heels of concerns expressed by the Foundation for Academic and Vocational Education (FAVE) and School Board for Secondary Education SVOBE that lower student numbers resulting in lower subsidies threatens their financial position and negatively affects quality education in their schools. FAVE oversees the two sections of St. Maarten Academy, while SVOBE oversees Milton Peters College (MPC) and Sundial School.

In explaining the lump sum subsidy regulation during his opening remarks, Smith told MPs that as of October 10, 2010, government introduced a new method of subsidizing government subsidized schools, called the Lump Sum Subsidy Regulation. According to the minister, the subsidy system offers school boards more freedom and flexibility regarding the subsidy they are granted. He said the rationale behind the lump sum system was to reduce the bureaucracy involved in financing education. “As every new system, this method of subsidy also came with its flaws. These were pointed out by several school boards but particularly by SVOBE,” Smith told MPs.

Taking the concerns and objections of the various school boards into consideration, Government Accounts Bureau SOAB conducted an audit of the new system in 2014. Several amendments were made to the lump sum system as a result of SOAB’s findings. The amended lump sum system was then approved by the Council of Ministers and put into effect as of August 2015. The new lump sum system included, among other things, adjustments to personnel and operational cost.

Covered under personnel cost were issues such as salaries linked to all of the functions listed in the function book as laid down in the Education Remuneration Decree, which includes the cost of salaries, allowances, benefits and allowances to which heads, teachers and other personnel are entitled, bonuses, contributions to their pensions, widowers and orphans insurance premiums legally due to them; the cost for professional development of education personnel and recruitment cost.

Covered under operating cost were charges for student care; construction cost; cost of purchasing school furniture, learning and teaching aids and school supplies intended to replace learning and teaching aids that can no longer be used due to long-term use or to supplement the supply of schooling needs in connection with the reduction through use; cost of the maintenance of premises and grounds; cost of keeping the school buildings or classrooms clean; cost of using electrical energy, gas and water; administration cost within the school and other expenses that are deemed necessary for education. The Education Ministry is also funding three functions on schoolboard level for the management of schools which Smith said is not required by law.

Despite the changes, Smith said SVOBE has consistently indicated that the amount of subsidy does not cover the cost for providing education within its schools. “As a result of this, the Ministry of Education, Culture, Youth and Sport and SVOBE have been in constant dialogue and the Ministry of Education, Culture, Youth and Sport has provided substantial additional resources on an annual basis since 2015 to SVOBE in an attempt to address its financial concerns and ultimately ensure the quality of education within its schools.”

He said in the case of FAVE…, up until March, it was not apparent that FAVE would be suffering from any financial difficulties.” In April, Smith received an administrative appeal from FAVE and the review of the appeals has begun.

“It is important to highlight at this point that the funding of education in accordance with the Lump Sum System means that school boards are provided with a certain amount of funds to facilitate the education of a certain number of students. Subsidy therefore increases as student numbers increase. In cases where student numbers decrease, subsidy will also decrease. In this regard, student numbers within secondary education have remained fairly consistent over the last seven years. However, student numbers within SVOBE and FAVE schools have declined. This is a result of a shift in student enrolment from VSBO/PSVE school types to Academic Education and Education with a focus on the creative arts. This is in line with policy decisions taken by the Ministry of Education, Culture, Youth and Sport to expand Secondary Education schools to include the MAC Comprehensive Secondary Education and the Charlotte Brookson Academy of the Performance Arts.”

In addition to the shift in student enrolment that has resulted in lower student numbers for FAVE and SVOBE, Smith said one must also acknowledge that all school boards are under an increased amount of financial pressure due to increased expenditures in connection with Hurricane Irma related repairs. Funds provided for subsidy of education, that would have normally been used to facilitate the regular execution of programmes have been allocated by school boards to cover repair cost that were not foreseen, to ensure the continuity of education.

“In light of government’s responsibility to ensure sustainable funding of education is guaranteed and government’s responsibility for the effective usage of public funds, the Ministry of Education, Culture, Youth and Sport remains committed to funding education optimally. As such, audited financial reports from school boards are essential to support required policy changes. Although, much improvement has been experienced in recent years, a lack of timely financial accountability on the part of school boards in general is an obstacle that the Ministry encounters in assessing the effectiveness of the funding policy,” Smith said.

“We must, however, continue to state that the school boards are the competent authority for the schools in their charge and are responsible for assuring the quality of education within these schools. In addition, I am sure you will agree that considering the sensitivities related to the SVOBE case, it will not be wise to share further details at this time. The Ministry of Education, Culture, Youth and Sport remains committed to working with all school boards to ensure the sustainable, effective funding of Education,” the minister said.

Following Smith’s opening remarks, MPs asked a range of questions and made several statements regarding the lump sum system and other issues related to education.

Smith is expected to be back in a week to respond to the questions.