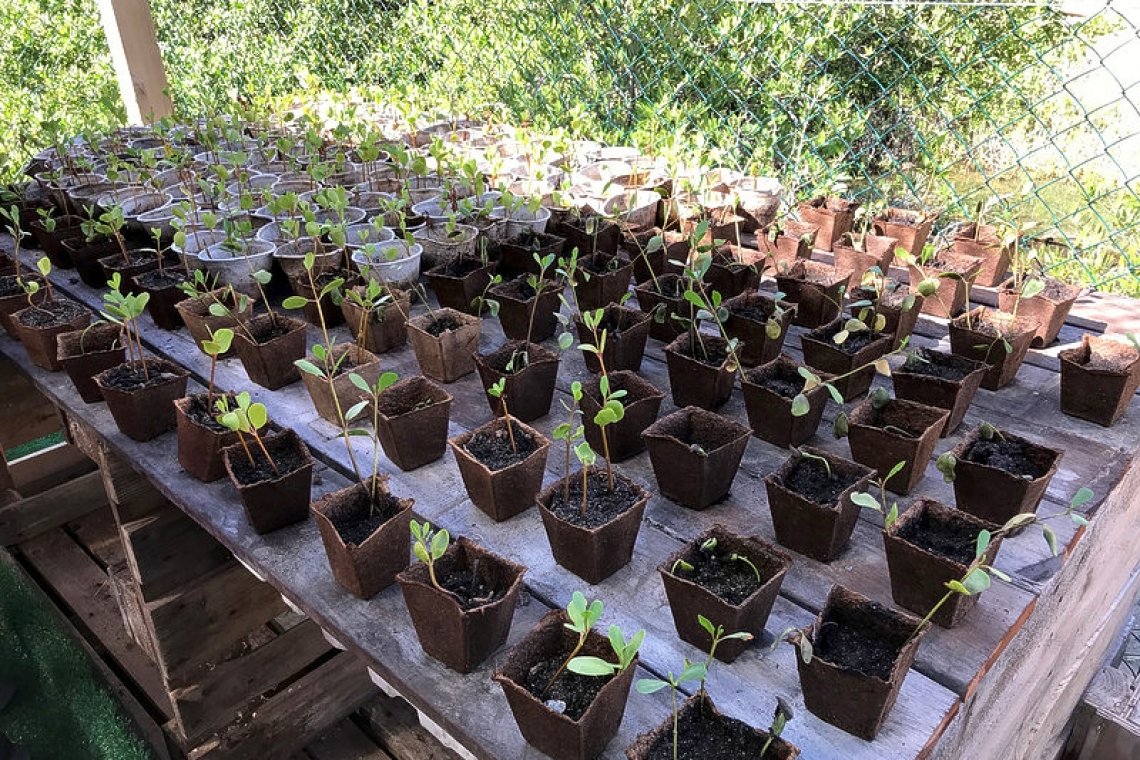 Mangrove seedlings on display in the nursery in Orient Bay. (Robert Luckock photo)

MARIGOT–Schoolchildren have been enlisted by Réserve Naturelle to assist with its mangrove re-planting project as a way of stimulating awareness of biodiversity and importance of protecting the environment. Mangroves in the ponds were largely destroyed by Hurricane Irma in 2017.

The funding was made possible back in 2018 thanks to four Michelin-starred chefs who organized a charity gala dinner in France for 90 guests at 550 euros per head with part of the proceeds going to Rotary Club.

At the nursery four species of mangrove seedling in small pots were arranged on tables under shade along with one for sea grapes. The mangrove seedlings stay in the pots about four to five months before the roots start to grow out and then they are planted, explained ranger Ashley Daniel.

They are planted in different areas depending on whether they are suited to saltwater or freshwater or earth. Daniel added, the mangroves are planted in a quadrant of squares which makes it easier to determine how many mangroves die and how many survive and thrive.

Of some 18 schoolchildren expected on Friday, one group of second grade eight-year-olds came from the Happy School in Grand Case.

“We have a collective project going on in the school about protecting the environment so the whole school is involved,” explained teacher Helen. “Each one of the kids has adopted a baby mangrove tree which they keep at home for two months. And within those two months they have to plant and restore it under the supervision of Réserve Naturelle and Sea Shepherd.

“One of the Reserve rangers, Vincent, already came to this group’s classroom to talk about the eco-system and flora and fauna. But this exercise today is something more tangible for the kids, to be actually involved. They all know about mangroves, how efficient they are, how they are 50 times more powerful than real trees, how they filter the air. They are really into it.”

Nicolas Maslach welcomed the Rotary donation to purchase mangrove seedlings and develop the nursery, noting damaged mangroves in their natural habitat would take anywhere from 20 to 50 years to grow back naturally. “This project is very good for biodiversity and bird life to have protected areas for mangroves,” he said.