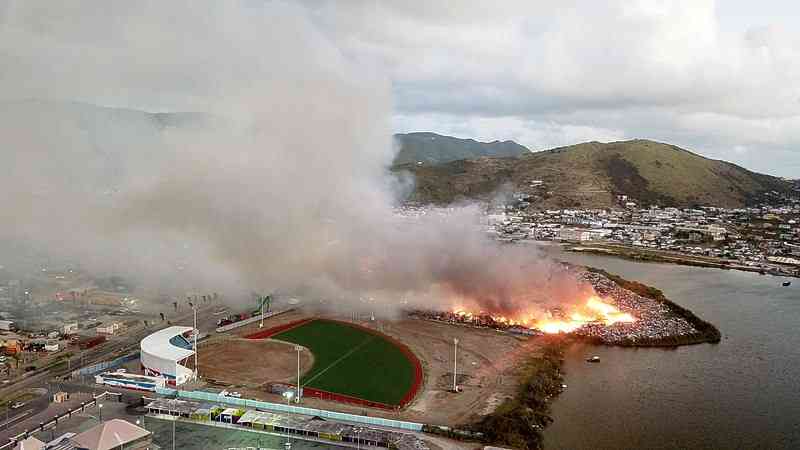 POND ISLAND–Schools in the Philipsburg area as well as the new Government Building on Pond Island will remain closed today, Tuesday for the second day, due to the effects of the fire on the landfill created after hurricane Irma.

Early Monday Wuite had visited the Asha Stevens Hillside Christian School and Learning Unlimited (LU) Preparatory School in Cay Hill to assess the situation regarding landfill smoke and in collaboration with school managers the decision was taken for the two schools to remain open as the winds had shifted and the smoke did not pose a threat at that moment. Wuite had also visited schools in the Philipsburg area and based on the site visits, in consultation with the Prime Minister allowed students to leave school early due to smoke.

Primary school pupils were released in the care of their parents or guardians and the Minister urged all businesses to allow employees to collect their children and make proper childcare arrangements.

The Ministry of Public Health, Social Development and Labour VSA is coordinating the evacuation. Residents, who live on Pond Island are “strongly advised” to evacuate their homes and find alternative shelter with family and/or friends. The Police and Fire Departments will be sending teams through Pond Island residential areas to assess who are still in their homes and will encourage them to seek alternative housing.

The Government Building and specific public services will remain closed today Tuesday, February 6. Secretary Generals and Department Heads within the seven ministries were advised to communicate with civil servants under their management to report to work where necessary and to arrange alternative locations and measures to ensure operations within key services of the Government of St. Maarten continues.

The Department of Social Services will be available at the Government Administration Building for emergency information for persons living in the Pond Island area.
The Fire Department has indicated during a Monday evening assessment that the fire continues to burn on the landfill. The Ministry of VROMI and the Fire Department have implemented a system of trenching along the perimeter of the fire to prevent further spread of the fire.

Although this method has contained the fire to a certain extent, the massive size of the fire continues to flare up and generate smoke, the release said. The Fire Department from French St. Martin continues to render assistance. The public is advised to wear nose and mouth mask to avoid the inhalation of the fumes generated from the fire.

The Fire Department continues to advise persons living downwind from the landfill fire, to close windows and doors, especially persons who have a respiratory challenge such as asthma, or shortness of breath and to pay particular attention to young children and senior citizens.

The release said Prime Minister Leona Romeo-Marlin and members of the Council of Ministers continue to assess the situation.