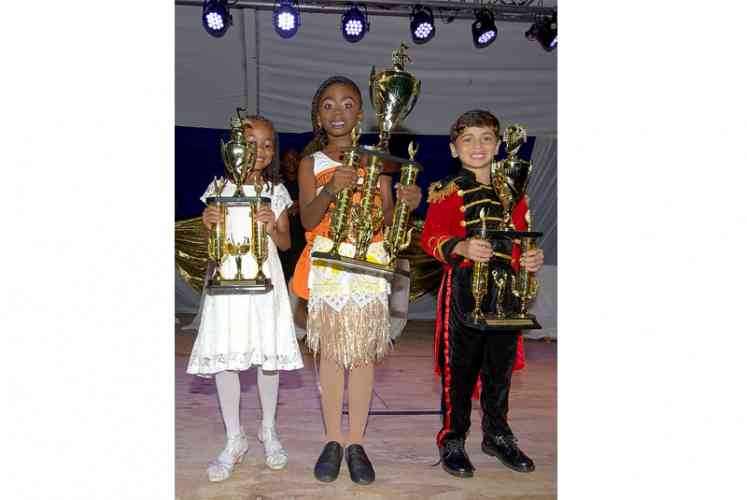 Winners of the event in a group photo.

COLE BAY–Saint Martin Promoting Young Ambassadors Foundation hosted its eighth annual Interscholastic Idol singing competition this past Saturday and Sunday. The foundation stated on Wednesday that the event was one of its largest shows to date, with a packed house on both Saturday and Sunday and the choir competitions surpassing the 1,000-person mark.

Seven schools competed In the Cycle 1 solo competition on Saturday evening. Very talented young starlets they were, but there could be only one winner. Pupil Brook-lyn Bell of Methodist Agogic Centre (MAC) Reverend John .A. Gumbs Campus won that top honour with 470 points for her performance and rendition of the song “How Far I’ll Go” from the movie Moana.

Coming in as first runner-up was Topper Daboul of Learning Unlimited Preparatory School with 450 points singing “A Million Dreams” from The Greatest Showman and second runner-up was I’hnata Thomas of Hillside Christian Schools Asha Stevens Campus with 440 points for her rendition of “Why I love you”.

In the Cycle 2 solo competition the winner was Sophia Suire of the St. Maarten Montessori School who out-sang her competitors to gain 565 points with her exceptional vocal range singing The Greatest Showman’s “Never Enough”.

The first runner-up, Makhali Richardson representing the MAC Browlia Maillard Campus, wowed the crowd and gained 520 points with his rendition of “I Rise”, and coming in as the second runner-up was Nerlene St. Jean of the Seventh-Day Adventist School, who gained 495 points with her melodious rendition of “Spirit”.

In the Secondary competition Dayshun Gordon was the winner for the St. Maarten Academy Preparatory Secondary Vocational Education (PSVE) section with 535 points. His calm disposition and vocal talent earned him a standing ovation from the very enthusiastic audience for his rendition of “Worth”.

First runner-up Shanica Williams also hailed from St. Maarten Academy, but the Academic Section, singing “I believe the children are the future” to gain 495 points.

There was an unprecedented tie for the second runner-up position which went to the Learning Unlimited Preparatory School’s Alysia Williams who sang “Hallelujah”, and Alyana Barnes of Milton Peters College (MPC) Caribbean Certificate of Secondary Level Competence (CCSLC) section who sang “I don’t want to be you anymore”. Both gained 440 points.

In the primary choirs competition, the Seventh-Day Adventist School choir, which sang an African medley, won with 241 points. The first runner-up place went to St. Joseph Primary School with 228 points, and the second runner-up position to the Leonald Connor School choir with 221 points for singing “Spirit”.

In the secondary choirs completion, four schools competed and the winner was the MPC choir with 243 points. Once again the competitions saw a tie: The Learning Unlimited Preparatory School choir and the St. Maarten Academy choir tied for the first runner-up position with 233 points. Caribbean International Academy received the second runner-up position with 210 points.

Both Saturday’s and Sunday’s shows ended on a high note with all patrons applauding the hard work and dedication of the organisation to pull off a show of this magnitude for eight consecutive years and for giving the youth of St. Maarten a platform where their talent could be showcased.

Foundation President Angelique Romou said she was extremely grateful for the enormous support the community of St. Maarten showed for the talented youth and encouraged the business community in St. Maarten to invest in the youth. She also thanked all the sponsors who contributed in one way or the other to the youth and the young Ambassadors team.

Romou invites the public to the International Idol competition which will be held at the tent at Port de Plaisance on Saturday, June 15, when they will see the St. Maarten Idols winners compete against different islands and countries for the title of International Interscholastic Idol.