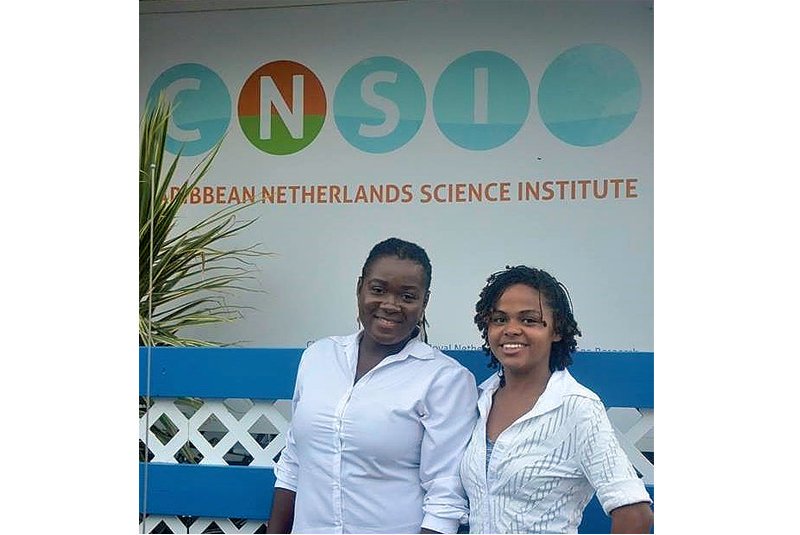 ST. EUSTATIUS–Last week’s Science Café, hosted by Caribbean Netherlands Science Institute (CNSI), focussed on marine issues by two speakers. The presentation of Sade Deane, who hails from Barbados, entitled “Marine Debris and You” and highlighted the ever-growing problem of persistent solid material that is directly or indirectly, and intentionally or unintentionally disposed of or abandoned into the marine environment. Achsah Mitchell presented her thesis about ballast-water stowaways entering a Jamaican port.

Marine debris gets to beaches, coastal waters and the ocean by human activities and actions. While some dispose of items correctly, such as waste from beach barbecues, feral animals scavenging for food often interfere with garbage and can cause it to become strewn among coastal areas. Others simply toss their garbage on the beach without considering proper disposal methods or recycling.

Abandoned fishing nets and other man-made materials can have negative effects on marine wildlife, such as seabirds, which can become entangled in fishing wire or ingest micro-plastics.

The Sustainable Development Goal 14 which is Life Below Water, Target 14.1, looks at preventing and significantly reducing marine pollution of all kinds, in particular from land-based activities including marine debris and nutrient pollution, by 2025.

This ambitious goal should not be taken lightly given the number of years manmade items remain in the environment, some for many hundreds or thousands of years.

Deane spent a week on St. Eustatius engaging with the island’s students as CNSI’s Youth Ambassador under the Nature Awareness Project, funded by the Ministry of Economic Affairs. She is an active member of the Caribbean Youth Environment Network and the coordinator of Barbados’ International Coastal Clean-up.

Mitchell presented her Master’s of Science thesis about ballast-water stowaways entering a Jamaican port. Several Caribbean countries export bulk commodities such as cement, gypsum and bauxite. Large cargo vessels travel over vast open seas to transfer these commodities. The inter-connecting network that this creates has allowed the global economy to grow into its current state.

Unfortunately, potentially invasive marine organisms can be stowaways in the ballast water that these vessels use to maintain certain balance at sea. A survey of these organisms was conducted on bulk-cargo vessels carrying bauxite from Jamaica to two United States’ ports in the Gulf of Mexico.

A protocol was also developed for sampling and analysing the ballast water, and recommendations of how to manage the threat of introduced invasive species.

Factors, such as the source(s) of the ballast water, were considered. For example, was ballast water retrieved from one port exchanged at sea before releasing at another port, thereby reducing the number of organisms being introduced? This poses a lower threat than a vessel that did not carry out ballast-water exchange.

This and other conditions were considered in determining the degree of threat of each vessel and route taken by a group of vessels.

A risk tier approach has therefore been recommended for Caribbean ports, which helps to reduce undesired regulations for vessels using our shores and to maximise on available funding. This is deemed useful for Caribbean countries with strong European ties that have already signed on to the Ballast Water Convention and thus require visiting vessels to comply to the global standards for ballast