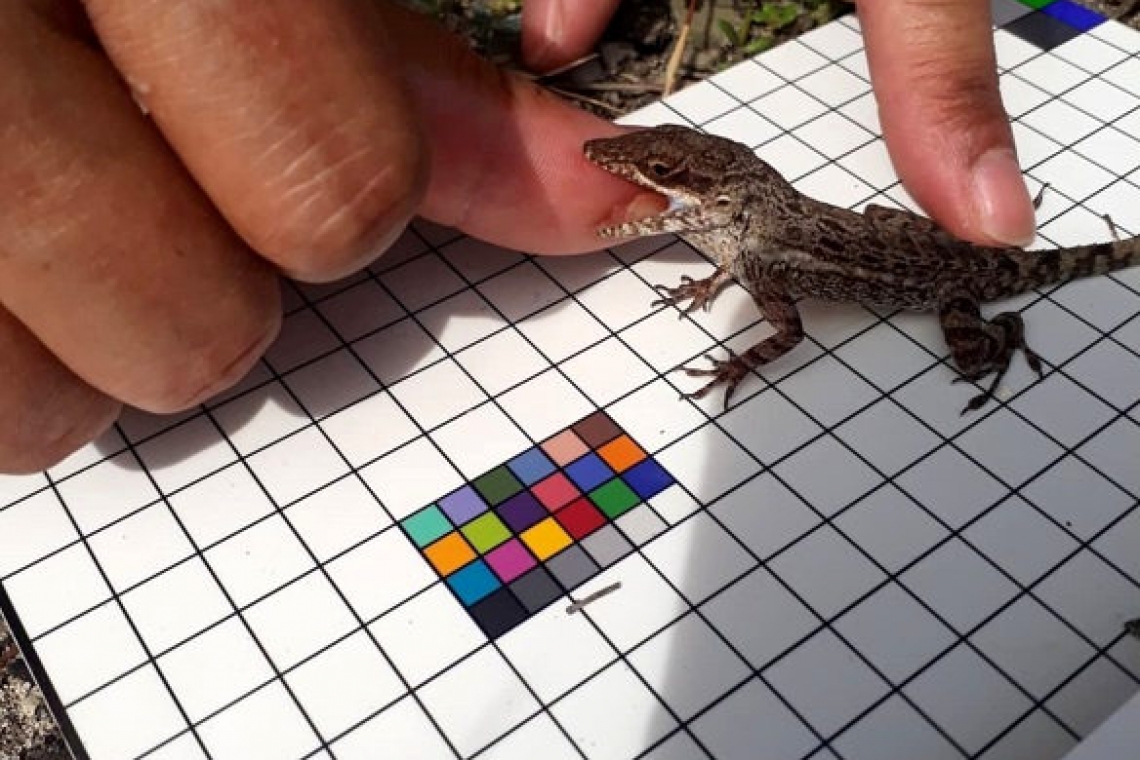 PHILIPSBURG–Researchers Michael Yuan of University of California, Berkeley, and Jeffery Frederick of the Smithsonian Institution collaborated with St. Maarten Nature Foundation in January to collect data about local reptile and amphibian species.

Yuan and Frederick are trying to understand critical differences between similar species and how their evolutionary paths deviated from neighbouring populations. This information could prove crucial in conservation efforts, said the Nature Foundation.

“The islands of the Lesser Antilles, which include St. Maarten, serve as biodiversity hotspots within the Caribbean, known to host a great number of endemic species. This research is not only critical for understanding the history of these species, but in designing effective conservation strategies for the future.

“As climate change continues to threaten global biodiversity, learning to properly protect endemic species will become increasingly important. … For example, understanding the genetic structure of island populations can identify genetically unique lineages that may be of conservation interest.

“Finally, through understanding their evolutionary history and adaptation to local environments, researchers can predict how further changes in the environment may impact these populations,” according to a press release issued by the Nature Foundation on Friday.

“With its diverse habitat range, paired with the fact that the Anolis populations of the island are known to have a wide variety of colours and patterns which may be adaptive to their environment, St. Maarten provides the perfect research site to understand the link between genetic, cellular, and phenotypic characteristics with the environment,” said Yuan.

“The researchers took a closer look at how Anolis – a genus of lizards – are evolving to match conditions within their specific habitats, specifically dry scrublands versus more temperate climates. The researchers also focused on how the geographical history of the Leeward Islands impacted the genetic evolution of local reptile and amphibian populations,” said the Nature Foundation.

To compare the evolutionary history of the Lesser Antilles, the researchers examined four amphibian and reptile species. These were the Lesser Antillean whistling frog (Eleutherodactylus johnstonei), turnip-tailed geckos (Thecadactylus rapicauda), and two species of Sphaerodactylus geckos.

“Each of these is widely distributed throughout the islands yet exhibits distinct historical lineages which should provide an interesting base for comparison,” according to the press release.

The invasive Cuban tree frog (Osteopilus septentrionalis) and tropical house gecko (Hemidactylus mabouia) were also studied. As they are known to introduce diseases, this was done to determine their impact on native populations.

“Samples collected will provide insight into how these diseases impacted the evolution and spread of reptiles and amphibians throughout these islands,” according to the press release.

Previously, the researchers completed a similar study in Montserrat about the Plymouth anole (Anolis lividus), as well as in St. Eustatius, St. Kitts, and Nevis which are inhabited by the Panther anole (Anolis bimaculatus) and Schwartz’s anole (Anole schwartzi).

“Here they were able to show a clear relationship between physical characteristics of the lizard and the habitat and climate,” said Nature Foundation.